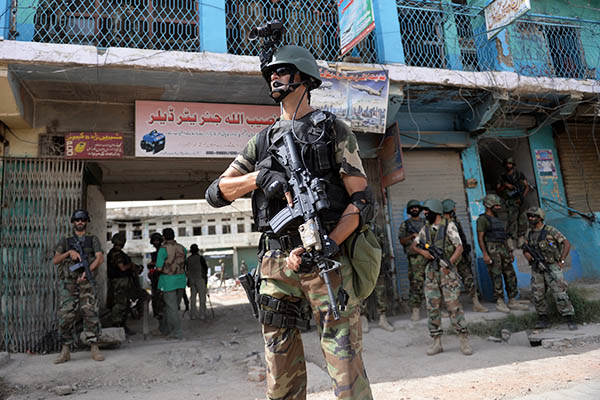 Security officials claim tribesmen still in North Waziristan are being used as human shields by terrorists.

When Pakistan Air Force jets rained down missiles on a village in North Waziristan last week, it was described as yet another victory over Taliban insurgents in an ongoing military offensive. Now, a new account has emerged of the killing of dozens of women and children in the airstrikes, sparking anger over rising civilian casualties and fears that a new generation of radicals is being created.

“Today early morning 35 fleeing terrorists were killed through aerial strikes in Shawal Valley,” was how the military’s information wing described the July 16 incident. The terse press statement was part of a regular series of updates sent out by the Army since Operation Zarb-e-Azb was launched in North Waziristan, aimed at clearing Taliban strongholds, on June 15.

Almost 500 “militants” are said to have been killed in the fighting so far, which has been enthusiastically backed by Pakistan’s major political parties and media, who see it as a means of tackling a decade-long Islamist insurgency that has claimed thousands of lives. But the official toll has been impossible to verify, raising questions among rights activists over the offensive’s true human cost.

According to multiple accounts by residents, 37 civilians were killed in Wednesday’s attack, including 20 women and 10 children. While villagers grieve, the incident has become a focus of rising anger among tribesmen who have managed to flee to border towns inside Pakistan, and who on Monday threatened to march on Islamabad if the operation does not end soon.

The bombardment in the Shawal Valley began just before 1:00 a.m., lighting up the sky as residents of Zoi Saidgai village sat down to eat their pre-dawn Ramzan meal. “It continued for hours, targeting 11 houses,” said Malik Mirzal Khan, an elder who lost his daughter and brother in the strikes, from a payphone in his village. “A single bomb dropped from the plane blew up two mud houses and the explosions could be heard 30 kilometers away,” Khan, part of a high-level peace council that attempted to avert the government offensive before it began, said.

He added that residents had made a list of the dead, and none of them were militants. “My 13-year-old daughter, brother, his wife and two of his kids were killed,” he said.

The rest, Khan said, “were not local or foreign militants, but innocent civilians who were killed. There were men, women, boys and girls. Those seven men who died were never involved in militancy.”

Noor Wali Khan, a 27-year-old truck driver, said he lost his mother and two-sisters-in-law when his house was bombed, while his brother and father are seriously wounded. Both men’s accounts were corroborated by three other witnesses and relatives, but the military has so far refused to comment on the matter on the record.

A senior security official speaking on condition of anonymity has said those who were killed had plenty of warning to evacuate. “If a terrorist is living with his family and does not abandon them even during the time of operation and we have solid ground intelligence about the terrorist and we target his hideout, what would you call it, collateral damage or what?” the source asked. “If a terrorist is using his family as human shields what do you expect the military to do?”

Khan, the elder, said his village was never informed it would be a target. “In the meetings with military and civil officials, we had been assured to stay home as our areas were declared safe and free from militant control,” he said, adding that he had conveyed the same message to the local population and had forbidden them from leaving their own houses. And he said he was furious with the government.

“America is our enemy, but they have never taken such cruel action against us which we had witnessed from the Pakistani government—our own country.”

According to the residents, no rescue officials were able to reach the remote area and locals dug out corpses using tools and tractors. Anti-government sentiment is running high in the village, fueling fears among observers that the military action could backfire by creating new recruits for the militants.

Wali Muhammad, a 28-year-old shopkeeper, said that the nature of Wednesday’s strikes meant the facts would eventually be known, despite the Army’s claims. “You can’t cover up the sun with a finger,” he said, using a Pashto expression that roughly translates to: “The truth will come out.”

Some 500 villagers turned out for funeral prayers to mourn the dead. “There were tears in the eyes of every person who participated,” Muhammad said. Asked whether militants had sought shelter in the village, Umar Khalid, a 35-year-old farmer, grew angry. “The government is powerful and we cannot stop its brutalities. But it was women who were targeted in this strike, not militants.”

In Bannu, where tribesmen held a jirga on Monday, elders said the Shawal Valley attack was not an isolated incident. “We want the military operation to be completed as soon as possible because civilians are suffering the most,” Malik Nasrullah, the chief elder of the North Waziristan tribes, told reporters.

Malik Mirzal Khan, the elder from Shawal, demanded an investigation into the airstrike—a request that is unlikely to be met. “We want to make sure such action should not be repeated for other people who are still living in Waziristan,” he said.