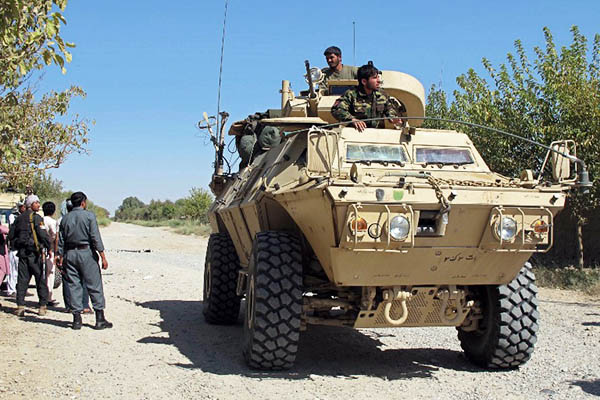 Interior ministry says commandos have flushed out militants with a targeted counter-attack.

Panicked residents fled the capital of the opium-rich southern Afghan province of Helmand Wednesday after the Taliban stormed an outlying neighborhood, triggering clashes as the insurgents step up offensives around the country.

The Taliban late Tuesday seized some police checkpoints in Babaji, a suburb of Lashkar Gah city, but the interior ministry said commando units mounted a swift counter-attack, flushing out the militants from the area. “The situation is under control. The enemy have been pushed back, 25 of their fighters have been killed,” said ministry spokesman Sediq Sediqqi.

Afghan forces were also battling the Taliban in Nad Ali and Greshk districts close to Lashkar Gah, where insurgents captured a number of security posts, provincial governor Mirza Khan Rahimi said. The fighting, which sent scores of families fleeing to neighboring provinces, has also threatened the highway which links the major southern city of Kandahar with Herat and Kabul.

The violence in Helmand comes precisely a year after the Camp Bastion base, a hub for British forces, was turned over to local troops. The province, a Taliban hotbed where U.S. and British troops were involved in years of fierce fighting, is also one of the world’s biggest centers of opium cultivation.

Emboldened by their brief capture of northern Kunduz city late last month, the insurgents have launched multiple offensives around the country, a development seen as a key test for overstretched Afghan forces.

Afghan troops were gearing up for a major offensive to retake the district of Ghormach in northern Faryab province. As many as two-dozen Afghan policemen including the district police chief were feared to be killed or captured after the Taliban on the weekend overran the district center close to the border with Turkmenistan, officials said.

Sediqqi declined to give any details about the offensive.

In the wake of recent Taliban gains, U.S. president Barak Obama last week announced a major policy reversal on Afghanistan that will see 5,500 U.S. troops remain in the country when he leaves office in January 2017 despite his earlier pledge to pull out next year.