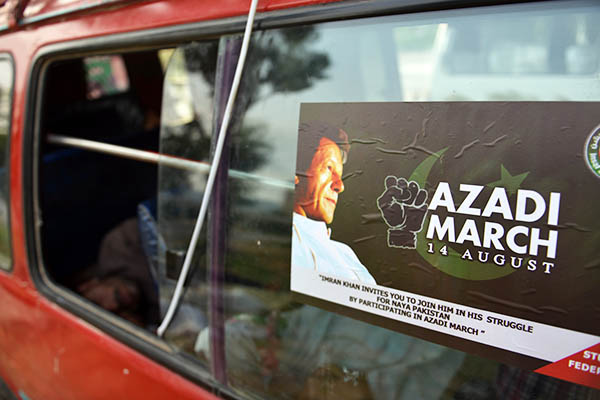 Police claim Khan’s vehicle was not shot at, but confirm that clashes occurred between PTI and PMLN activists.

Cricketer-turned-politician Imran Khan said he and his followers were fired on by supporters of the ruling Pakistan Muslim League (Nawaz) during a rally on Friday, but police said that although there were clashes between the two sides no shots were fired.

Khan is leading thousands of his supporters to Islamabad in a rally to demand Prime Minister Nawaz Sharif resign, saying that last year’s general elections in which he swept to power were rigged.

Police and witnesses said activists from Khan’s Pakistan Tehreek-e-Insaf (PTI) party clashed with supporters of Sharif’s PMLN in the town of Gujranwala.

Speaking to ARY television news, Khan said: “They threw stones at us while standing at police vans. They fired bullets at us.”

An AFP photographer at the scene heard no gunfire, and police also said there were no shots.

“Workers of PTI and PMLN clashed in Gujranwala and threw stones at each other,” said a police spokesperson. “There was no firing incident.”

The AFP photographer said a group of up to 40 youths who were following the convoy and shouting slogans clashed with PTI workers, but police later dispersed them.

Exact numbers on the march are difficult to judge, and more people are likely to join it as it passes through towns along the GT Road, but Khan already hailed it a success. “I can only see that the monarchy is nearing its end,” Khan said, referring to Sharif. “The people have decided as I had said that one million people will come to Islamabad and they have come out.”

Both Khan and Tahir-ul-Qadri, whose Pakistani Awami Tehreek is also participating in the anti-government protests, had originally planned for their marches to converge on Islamabad on Thursday, Pakistan’s independence day, but it now looks likely that neither will reach the city before late on Friday afternoon, at the earliest.

A spokesman for Qadri said that their convoy was further along the road to Islamabad than PTI, in the town of Jehlum. “Our convoy is moving at a very slow pace and we expect our arrival in Islamabad very late tonight,” he said.

Security in Islamabad has been ramped up in recent days, with more than 20,000 police and security forces on the streets. Almost all roads into the city were blocked on Thursday by the authorities with barbed wire and shipping containers, but many barriers were removed on Friday.

After days of speculation that the authorities would seek to stop marchers entering the city, Interior Minister Chaudhry Nisar Ali Khan told reporters Thursday that both PTI and PAT would be allowed to hold rallies.

Government officials have accused the march organizers of trying to derail democracy and Sharif said the marches were a distraction from more pressing issues.