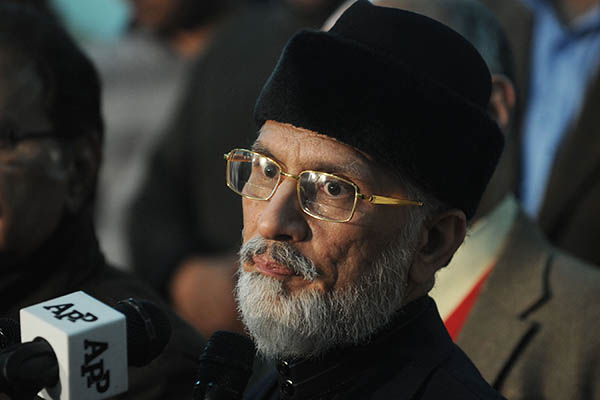 At least nine killed, over 80 injured in riots prompted by police removing security barriers from outside Dr. Tahir-ul-Qadri’s residence in Lahore.

Nine people, including two women, one teenaged boy and one policeman, were killed and at least 80 others injured in clashes on Tuesday between supporters of Pakistan Awami Tehreek (PAT) chief Dr. Tahir-ul-Qadri and Punjab police in Lahore.

“Clashes between workers of Dr. Tahir-ul-Qadri’s PAT party and police started in the morning when police started removing barriers from the road [outside Qadri’s Lahore residence in Model Town],” Sohail Azim, a police officer on the scene, told Newsweek.

In response, police baton-charged the protesters and fired tear-gas shells on them. TV footage also showed police officers opening fire on the protesters and Qadri’s residence, resulting in the deaths. However, Azim claimed police had only used rubber bullets. “We tried our best to stop people from throwing stones at us and just used rubber bullets against them,” he said.

Police personnel remained deployed in the area on Tuesday afternoon to monitor the removal of rubble and ensure protesters are kept under control.

The injured, including 17 police and over 60 PAT workers, have been shifted to a nearby hospital. Party activists also reached the hospital and started protesting against the government.

In a series of tweets condemning the attack, Dr. Qadri alleged that the government had attacked his supporters to distract attention from the Army’s operations in North Waziristan. He also warned of retaliation. “I believe in peace, but if they shed blood, the public will not be in my control,” he said. He also said that he would file a First Information Report against Prime Minister Nawaz Sharif and Punjab Chief Minister Shahbaz Sharif over the murders of PAT workers in the clashes with police.

In a press conference, Dr. Qadri said that 40 of the injured were in critical condition. He also said that he would not be deterred by these scare tactics and would come to Pakistan to fight “for the oppressed and poor.”

Addressing a separate press conference in Lahore, the Punjab chief minister condemned the incident, but urged people to observe patience in light of the security situation prevailing in Pakistan. “In the interests of fairness, I have ordered a judicial commission to impartially investigate the tragedy,” he said. Sharif admitted that police had targeted innocent people, adding that they deserved justice. He also said that he would step down immediately if the judicial commission found him guilty of involvement in the attack on Tahir-ul-Qadri’s supporters.

The Muttahida Qaumi Movement (MQM) also expressed solidarity with Dr. Qadri, and announced a nationwide day of mourning on June 18. Petrol stations and major commercial areas in Karachi started shutting down shortly after the announcement, with residents rushing to buy supplies. Meanwhile, the Opposition in the National Assembly staged a walkout in protest to the killings in Lahore. Syed Khursheed Shah, leader of the Opposition in the National Assembly, said the killings were a conspiracy against Prime Minister Nawaz Sharif and urged the government to resolve all issues through dialogue.

Dr. Qadri, who has been living in self-exile in Canada, has announced that he will come to Pakistan to head a nationwide protest against the alleged corruption of the PMLN-led government. PAT workers have alleged that the attack on his residence was a scare tactic to dissuade them from attending the new protest, but have vowed that they will not be deterred.

We bloody pakis deserve this. These selfish idiots living abroad control us, just for the sake of power. And we common people never tried to use our own mind.

If you think Sharifs are doing for your benefit then they are showing you ‘Sabz baagh’. You will realize at the end that whatever they did was fir their own personal interests. As far as TUQ is concerned, I thank him for living abroad with us(I lived abroad). At least there is someone whom we can refer to when it comes to true Islamic teachings. I was inspired by him later on when he issued the Fatwa against terrorism. There are so many ‘scholars’ and ‘pirs’ living abroad but only fir their own interests. TUQ is one of the very few scholars who has worked wholeheartedly to promote the true Islamic teachings…peace, love, harmony and affection. You should do some research on TUQ RATIONALLY and then make your opinion. Had he lived abroad for his own interests, I would be against him.

Yes these selfish overseas Pakistani’s also send us remittances which is our largest source of income!!

Good joke Dr. sab, they dont send remittances for the sake of country they send for their relatives.

Curent gov is civil autocratic gov. They are not leader but profit multuplier, feudals and crual. Slute to the protestors and flag crriers of noble cause.