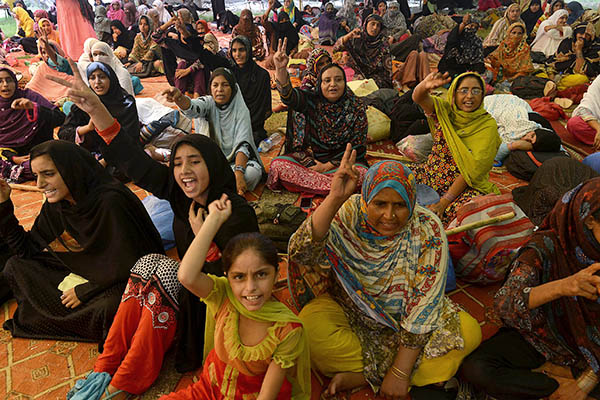 Tahir-ul-Qadri’s supporters gathered outside his house in Lahore. Arif Ali—AFP

Two people including a policeman were killed in renewed clashes on Saturday between followers of firebrand cleric Tahir-ul-Qadri and police after authorities blocked roads leading to his headquarters in Lahore.

“An elite commando of Punjab police succumbed to his injuries as a result of a clash with protesters in Sargodha,” said Punjab police spokeswoman Nabeela Ghazanfar. She said supporters of Tahir-ul-Qadri armed with knives and sticks also clashed with police in Faisalabad. “Around 10 police vehicles were torched while dozens of police personnel were injured,” she said.

In another incident, a supporter of Qadri died of gunshot wounds, sustained the day before in Multan. “The body of one protester from Multan was handed over to his relatives after carrying out the post-mortem in Multan,” said senior police official Shakir Hussain Dawar.

Violence broke out on Friday after hundreds of baton-wielding supporters of the cleric tried to remove shipping containers used to block the roads to his base in the Model Town area of Lahore.

Qadri, who was based in Canada until recently, had previously threatened to march on Islamabad and overthrow the government of Prime Minister Nawaz Sharif. He returned to Pakistan in June to lead what he terms a “peaceful revolution,” claiming the country’s political system only benefits the elite.

Following Saturday’s renewed clashes, the cleric called off a mass prayer procession due to be held on Sunday in Lahore for the victims of previous violence between his supporters and the authorities in June. “All the roads leading to Lahore have been blocked and the police are firing at our protesters, it is not possible for my activists to reach Lahore and I don’t want more bloodshed,” the cleric said in a televised press conference. “I announce mass prayers sessions to be held in all villages, towns and cities across the country, we cannot afford to lose more lives,” he said.

The cleric also claimed that seven of his followers had been shot dead by police, a claim rejected by security forces. “The police are firing straight at the chests of protesters and people traveling toward Lahore from various cities of Punjab,” he alleged. “More than 1,000 people have sustained bullet injuries and they are not even allowed to go to hospital, the Punjab government has closed all hospitals for them,” Qadri claimed at the press conference.

Earlier on Saturday, P.M. Sharif rejected Qadri’s calls for “revolution” in an address to the National Security Conference in Islamabad. “If people are trying to bring revolution to create chaos it won’t be accepted,” the prime minister said.