Clashes in India After Court Convicts Guru of Rape 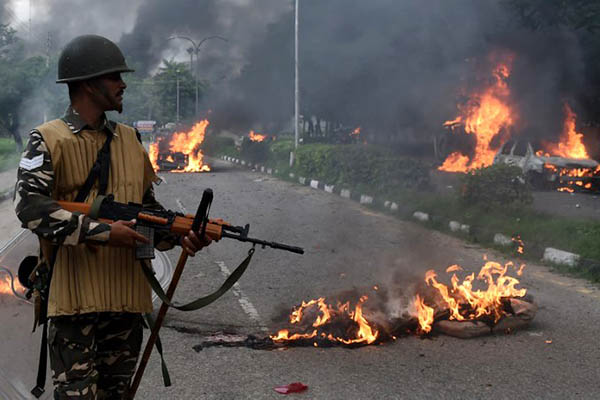 At least 32 people were killed on Friday when clashes broke out in northern India after a court convicted a controversial religious leader of raping two of his followers, sparking fury among tens of thousands of supporters who had gathered for the verdict.

Authorities rushed hundreds of troops to the city of Panchkula after followers of guru Ram Rahim Singh torched cars went on a rampage throwing rocks and attacking television vans and setting fire to dozens of private vehicles. More than 100,000 were estimated to have gone to the city in Haryana state, where India’s federal investigations agency had set up a special court to rule on the charge that he had raped two female devotees.

Authorities said 32 people had been killed and around 180 injured after rioting broke out in Haryana, where many areas were now under curfew. “The situation continues to be grim but we are gaining some ground. Hopefully we will mobilize more forces in the night to take control,” a senior state official told AFP on condition of anonymity.

He said the large crowd went berserk soon after the verdict was pronounced and attacked police and set vehicles afire before the police took action. Most of the fatalities were caused by gunshots, the officer said.

Ram Rahim Singh has a vast following in many states of northern India, including in Haryana, where he runs a spiritual movement that claims to have millions of devotees around the world. Authorities imposed an indefinite curfew in Panchkula, where mobile Internet services had earlier been cut off.

“I don’t understand what the government and the police are doing. We have been feeling unsafe since yesterday and all our fears came true today,” said local resident Sandeep Singh. “Why did the police not act swiftly and forcefully against these followers?”

As news of Singh’s conviction spread there were reports of violence in several districts of neighboring Punjab state and on the outskirts of the capital Delhi, which borders Haryana. Authorities imposed curfew in at least four districts of Punjab to curb spread of violence.

“Two train stations have been burnt in Punjab and two empty [train] coaches have been set on fire in Delhi’s Anand Vihar station,” said Neeraj Sharma, a spokesman for Indian Railways. Hundreds of trains passing through Punjab and Haryana have been cancelled, he said.

Prime Minister Narendra Modi condemned the violence on Twitter, saying “the instances of violence today are deeply distressing.” He said the federal government was monitoring the situation and urged everyone to “maintain peace.”

Prosecutor Harinder Pal Singh Verma told AFP the guru was “calm after the verdict was passed” and had been flown by helicopter to another city in Haryana. He will be sentenced on Aug. 28.

The 50-year-old self-styled “godman” is known as the “guru in bling” for his penchant for bejeweled costumes, although the source of his apparently vast wealth is unclear.

The rape case was brought against him after an anonymous letter was sent to then prime minister Atal Bihari Vajpayee in 2002 accusing him of repeatedly raping the sender and several other women in the sect. A judge asked the Central Bureau of Investigations to look into the accusations, but it took years to trace the alleged victims and it was not until 2007 that two women came forward and filed charges.

India has been rocked by numerous scandals involving popular ascetics claiming to possess mystical powers, and Singh is no stranger to controversy. In 2015 he was accused of encouraging 400 followers to undergo castration at his ashram so they could get closer to god. He also stood trial for conspiracy over the murder of a journalist in 2002.

He describes his sect as a social welfare and spiritual organization.

Speaking before his conviction, supporters who had gathered in Panchkula credited him with turning their lives around, with some saying his organization had helped them kick an addiction to alcohol. “I’ve been part of the Dera movement for two decades and in that time I have not touched a drop,” said Gajendere Singh, a recovering alcoholic who said he was aged around 60. “Before joining, people did not pay me much attention. But after, I had a support network.”

Singh’s work has angered mainstream religious leaders in India, particularly Sikhs who say he insults and belittles their faith. There were protests in the Sikh-dominated state of Punjab over Singh’s 2015 appearance in a film entitled MSG: The Messenger of God, which showed him performing miracles, preaching to thousands and beating up gangsters while singing and dancing.