by AFP and Newsweek Pakistan September 1, 2014 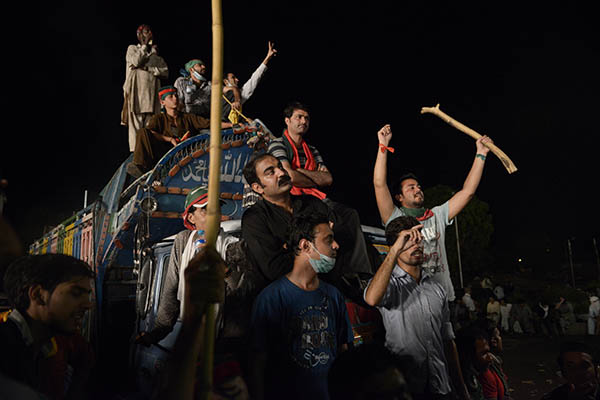 Anti-government protesters armed with rocks and wooden clubs clashed with police in Islamabad on Monday, hours after the Army called for a peaceful resolution to the political crisis rocking Pakistan.

Opposition groups marched to the capital on Aug. 15 in a bid to topple Prime Minister Nawaz Sharif, triggering a crisis that has raised the specter of military intervention in a country that has been ruled for half its history by the Army.

The Army urged the government and protesters to settle their differences peacefully on Sunday night, but warned it was “committed to playing its part in ensuring security of the state,” after clashes left three dead.

Violence began on Saturday night when followers of former cricketer Imran Khan and populist cleric Tahir-ul-Qadri tried to storm Sharif’s official residence. Fresh clashes erupted on Monday morning as heavy rain fell on the capital, as more than 3,000 demonstrators again tried to march on the building.

Protesters pelted riot police with stones and some smashed up motorbikes with wooden clubs. Police tried to respond with teargas but the heavy rain appeared to make it ineffective. Several senior police officials, including the senior superintendent and the deputy inspector general of Islamabad police were shifted to hospital after being injured by the rioters.

After an emergency meeting of top brass in Rawalpindi, the Army voiced support for democracy—but also stressed its own role in maintaining security. The statement opened with a backing for the government but ended on a hawkish note—which a senior government official said reflected differing views within the Army’s top brass. Pakistan’s last period of military rule ended in 2008. But the official said another coup remained “less likely.”

“We have traveled this road for seven to eight years, so things have been tested the institutions are much stronger,” he said. “I hope and pray the system survives. There will be some losses but they will be recovered,” he added, referring to the significant concessions that observers say the government will need to give the Army if it is to survive.

Khan and Qadri claim the 2013 elections that swept Sharif to power were rigged, though local and foreign observers rated the polls as relatively fair and credible.

A mob of PTI and PAT stormed the state-owned Pakistan Television station, with local media showing the rioters breaking into the building and beating up male employees. They also ripped out the wiring and took the channel off-air.

Speaking from the roof of a shipping container on Sunday, Khan vowed to continue his protest “until our last breath,” adding he would file murder charges against the prime minister over the violence. He urged his followers to exercise restraint on Monday, as they continued to storm state buildings and attack police deployed to ensure their security.

The weekend clashes left nearly 500 people injured, including some children and nearly 100 police officers. Khan and Qadri have drawn thousands to the streets of Islamabad, but their call has not mobilized mass support beyond their core followers.