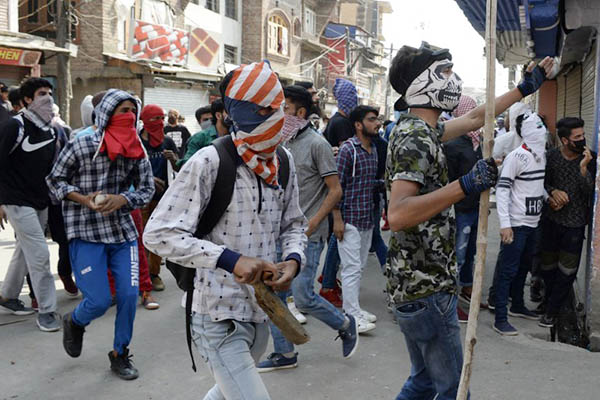 Police fired tear gas and chilli spray grenades to disperse thousands of mourners taking part in a funeral procession for a youth who died on Saturday after being run over by a paramilitary vehicle in India-administered Kashmir.

Protesters hurled back stones at Indian security forces in the latest outbreak of violence in the divided region’s main city, Srinagar. At least four demonstrators were injured, according to police and eyewitnesses.

Kaiser Bhat, 21, died in hospital after being hit by a Central Reserve Paramilitary Force vehicle near the city’s Central Mosque on Friday during a demonstration against alleged police violence. A video that allegedly shows the armored vehicle hitting protesters has been widely shared on social media. It shows scores of protesters throwing rocks at a lone vehicle as it races towards a crowd. Other images show two youths under the vehicle, one crying for help.

It was unclear whether the victims were protesters or bystanders.

Officials said the driver has been charged with dangerous driving, while two other youths hit by the vehicle were still being treated. “We have taken a strong note of yesterday’s incident and will take strict action,” S.P. Vaid, director general of India-administered Kashmir police, told AFP.

Authorities cut mobile internet services and put reinforced patrols on the streets on Saturday, while separatist groups opposed to Indian rule called for a general strike. Last month another protester was killed by a police armored vehicle in Srinagar. Police initially denied involvement in the death until a video—shot on a mobile phone—showed the vehicle hitting the man.

Bouts of street protests have rocked the region for months, with almost daily incidents of clashes between government forces and protesters.

Friday’s protest erupted in response to clashes last week between police and protesters near the Central Mosque that left nearly 50 people injured. Devotees alleged the police fired tear gas and shotgun pellets inside the mosque.

Militants have also upped their attacks on Indian troops after New Delhi ordered a 30-day halt to its military operations in the Muslim-majority region for Ramzan. Militants have rejected the offer. Suspected militants hurled grenades at government forces at three separate locations in Srinagar, leaving four paramilitary troopers and two civilians wounded in the explosions.

Three similar attacks were carried out on Friday in Srinagar and southern Anantnag district. One of the targets was a ruling party lawmaker.

Kashmir has been divided between India and Pakistan since the end of British colonial rule in 1947 but both countries claim the territory in full. India has about 500,000 soldiers in the part of Kashmir it controls, where scores of armed groups are fighting for independence or a merger with Pakistan. Hundreds of thousands, mainly civilians, have been killed in the violence since 1989.