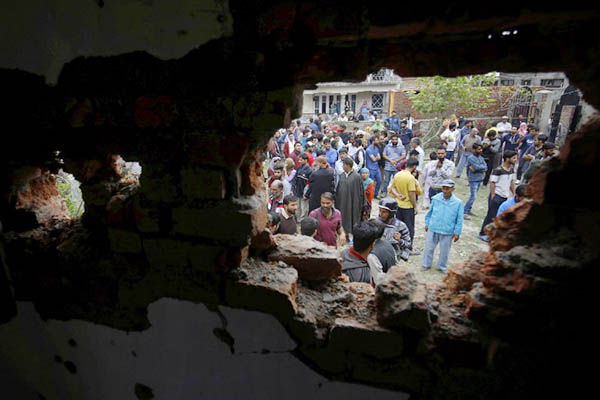 Three alleged rebels and a civilian were killed in a gun battle on Saturday in Srinagar in India-administered Kashmir, police said, the first in the restive region’s main city this year.

The three men, allegedly militants, died in a shootout after government forces surrounded a densely populated neighborhood in the old part of the city, director general of police Shesh Paul Vaid said.

A young man also died after he was hit by an armored vehicle as hundreds of residents tried to help the rebels escape from the military cordon in the heart of Srinagar, a police officer told AFP on condition of anonymity.

A paramilitary trooper was injured during the exchange of fire.

Since last year gun battles between government forces and militants seeking an end to Indian rule in Kashmir have become more frequent, in a region divided between India and Pakistan but claimed in full by both.

This year the fighting has left a total of 110 dead, according to officials, with 20 civilians, 28 security forces personnel and 62 militants estimated to have died.

On Saturday hundreds of residents hit the streets near the site of the firefight, shouting slogans of freedom from Indian rule, witnesses said. The protests and clashes later spread to other areas of the city’s old quarters.

India has deployed more than 500,000 soldiers to tackle the rising militancy and increasing civilian support for the rebels. New Delhi is also preparing to deploy elite commandos from its National Security Guard, known as Black Cats, to the disputed territory.

India often accuses Pakistan of fueling the insurgency, a charge Islamabad denies saying it only provides diplomatic support to the Kashmiri struggle for right to self-determination.