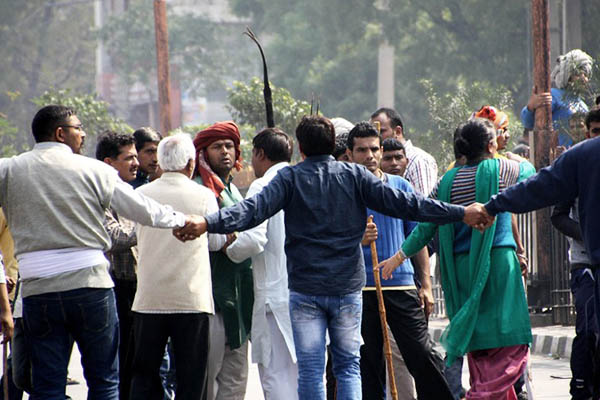 Why does caste still exist in modern India?

Members of the Jat caste in a northern Indian state have staged riots and arson attacks to demand preferential access to jobs and education, and at least 19 people have been killed. Here are key questions about India’s caste system:

India’s centuries-old caste system divides people into four main classes starting with the priestly Brahmins and ending with the Dalits, formerly known as “untouchables.” Although the system has been officially abolished, it still prevails in rural areas and determines where people live, who they marry and what type of work they do.

Discrimination in villages is rife, with members of low castes barred from entering the same temples as those of higher groups, using communal wells or even walking on the same roads.

India is undergoing rapid economic change, but millions especially in underdeveloped rural areas still live on less than $1.25 a day.

Governments have tried to help the poorest and most marginalized groups by setting aside a proportion of public service jobs and university places for Dalits and other so-called “backward classes.”

But competition for these limited places is fierce, with thousands applying nationwide for even the most menial public sector jobs. Many grumble that they miss out because so many places are set aside for deprived classes, breeding anger and resentment.

Who is rioting and what do they want?

The Jat caste is the single biggest community in Haryana state bordering New Delhi, with nearly eight million members. Many are farmers who have suffered in recent years from falling crop prices and drought, and say their children are facing bleak futures.

Jats want the Haryana government to include them in the list of “other backward classes” so that they can qualify for reserved government jobs and college places.

The relatively well-off Patel caste of traders and farmers staged violent protests last year in the western state of Gujarat, with similar demands.

How have authorities responded?

Thousands of troops were deployed on Saturday after weeklong protests turned deadly. After meeting Jat leaders on Sunday night, the Haryana government agreed to the Jats’ inclusion in the quota system.

Troops are now unblocking highways and other major roads and have regained control of a canal that supplies most of neighboring Delhi’s water after protesters seized control and diverted the supply.

What will happen next?

Jat leaders have agreed to call off protests completely, and Haryana’s government will prepare a bill for Jats’ inclusion in the quota system.

However, the bill still faces hurdles since India’s top court mandates a 50 percent cap on quotas for places—which Haryana has already reached.