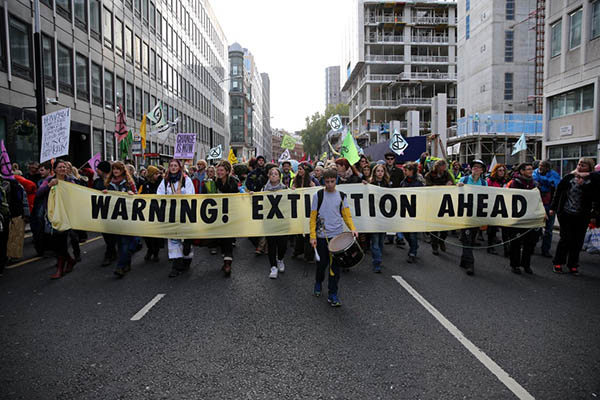 Climate protesters from Extinction Rebellion vowed on Wednesday to “occupy and shut down” a London airport that connects to the British capital’s global financial hub.

The year-old group is spearheading a two-week global campaign that kicked off Monday with partial shutdowns of traffic in cities stretching from Sydney to New York. Their main focus has been London, where the fast-growing group backed by Swedish teen activist Greta Thunberg was formed by U.K. academics studying the effects of harmful carbon emissions on Earth.

Extinction Rebellion said its “Hong Kong style” occupation of London City Airport would start on Thursday at 9:00 a.m. and run through Saturday night. “The Fly Today, No Tomorrow action will involve a ‘Hong Kong style’ occupation of the terminal building, lying, sitting or gluing-on in front of the departure and arrivals gates,” it said in a statement. “Hundreds of participants have already signed up to nonviolently use their bodies to close the airport, and are willing to sacrifice their liberty to achieve this aim.”

Extinction Rebellion said it was targeting the east London airport because it was planning a £2-billion expansion. The small city hub says on its website that it has begun a £480-million development project designed to quadruple the size of its only terminal.

The airport lies some five kilometers east of the Canary Wharf business district—one of Britain’s main financial centers—and the nearby City of London.

Metropolitan Police commissioner Cressida Dick said thousands of officers from across the country have been deployed to help free up traffic on bridges and streets. “They’re working in challenging conditions, they are working very long hours, and they have managed—so far—to secure the bridges, to clear the arterial routes through London and thereby minimize disruption,” she said in a video posted on Twitter.

Prime Minister Boris Johnson has called the protesters “uncooperative crusties”—a disparaging term used to describe a young homeless person or someone with a shabby appearance. Johnson’s father Stanley said at an Extinction Rebellion rally on London’s Trafalgar Square that his son was only making a joke.

“I regard it as a tremendous compliment to be called an uncooperative crusty. That was a remark made in humor,” Stanley Johnson told Britain’s Press Association at the event. “Don’t forget we grew up in the country,” he added. “Nature is in our blood.”

Extinction Rebellion wants governments to adopt policies that cut harmful emissions to a net level of zero by 2025. Britain has set itself the target of 2050.