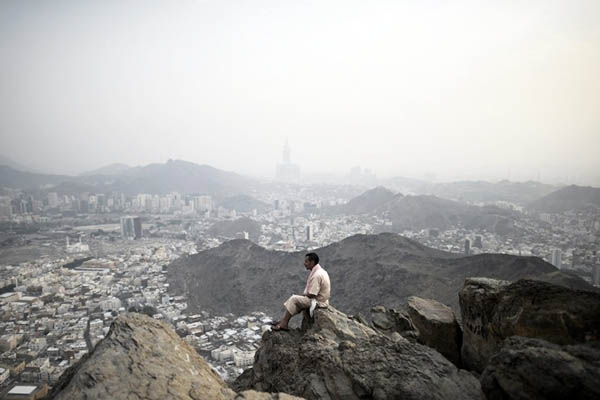 With sweat and tears, pilgrims follow in footsteps of Islam’s Prophet ahead of hajj.

Their faces bathed in sweat, cheeks stained with tears, dozens of Muslim pilgrims scale Mecca’s Jabal al-Noor mountain, undertaking the arduous ascent to follow in the footsteps of Islam’s Prophet. It was in a cave in this rugged, rocky peak overlooking the holy city of Mecca that Muslims believe the Quran was first revealed to the Prophet when he was 40 years old.

The annual hajj pilgrimage begins on Tuesday, and more than a million faithful have already flocked to Saudi Arabia in preparation for what will for many be the highlight of their spiritual lives. In sneakers or slippers, and some even using walking sticks, men and women of all ages take the challenge to climb the 642-meter peak, whose name means “Mountain of Light,” despite the scorching heat.

Islam’s Prophet was said to have frequently climbed the mountain to meditate well into his later years.

The Prophet “was old and he used to climb,” says Fuad Tajelddin, a Senegalese pilgrim in his fifties. “Even his older wife Khadeeja used to climb the mountain twice every day. So for us… it’s an obligation,” said the pilgrim, wearing sweatpants, a sweat-drenched shirt and a cap as he climbed the stairs leading to the summit.

Many of the elderly climbers sit on the sides of the hill to rest and sip water before resuming their journey, which is usually done at dawn or a few hours before sunset. Others send images of the climb on their phones while many pause every now and then for a selfie.

At the peak, pilgrims gather to enter the Hira’a cave where Islam’s Prophet is believed to have spent much of his time pondering nature and creation. At the cave, they pray, cry, rest and seek blessings by touching and kissing its walls.

But members of Saudi Arabia’s religious police deployed in the area try to convince the faithful to refrain from such emotive behavior. The oil-rich kingdom, home to Islam’s holiest sites, applies a strict version of Sunni Islam, known as Wahabiism, which prohibits idolizing any religious figures including the Prophet. Critics accuse Saudi authorities of burying away sites linked to the Prophet in Mecca and Medina, as part of a series of massive redevelopment projects.

The cave visit itself is not part of the rituals of the hajj, which this year goes ahead against the backdrop of a deadly crane collapse at Mecca’s Grand Mosque, which killed more than 100 people earlier this month. However, the sacred site “is part of our faith,” said Shawqi Haydous, a Lebanese pilgrim who was almost at the mountain summit. The Prophet “received part of the Quran and revelation came to him” in the cave.

“This is the fifth time I visit the cave. I feel happy every time I come,” he said. “It’s very beautiful to see where Khadeeja came to bring him food even though it’s not a must in the hajj rituals.”

The hajj will officially start next week but many have arrived earlier to perform the lesser pilgrimage, the Umrah, and to visit holy sites in Mecca and Medina, where the Prophet is buried.

“I don’t encourage all people to come here because it’s risky,” said Haydous, stopping to wipe his brow. “But I think all who are able to come here must do it.”

Almost an hour later, the call to prayer echoes through the city which begins to light up from below, drawing the pilgrims back down the slippery stone steps before darkness and silence descend on the hill for another night.