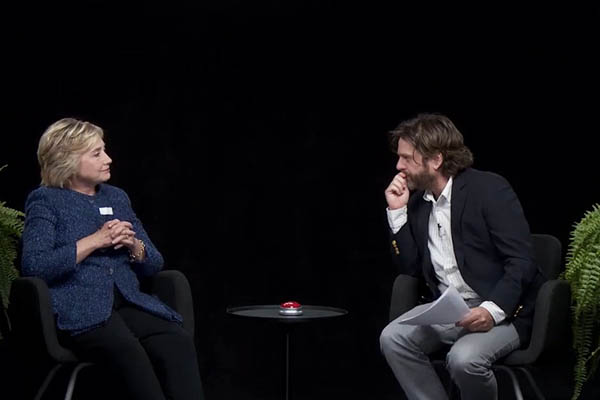 Ready to do almost anything to attract young voters, Democratic presidential candidate Hillary Clinton appeared Thursday on a parody celebrity show where she was asked: “What happens if you become pregnant?”

Visibly uncomfortable, Clinton—68 and presumably well past her child-bearing years—however gamely played along with comedian and actor Zach Galifianakis, host of Between Two Ferns. “I could send you some pamphlets that might help you understand,” she offered.

Galifianakis, whose career had a breakthrough with his role in the 2009 hit comedy film The Hangover, has a strong following for his online show, where he lobs absurd, sexist or just aggressive questions at his guest as they sit between two potted ferns.

With the Nov. 8 election around the corner and the race with Republican nominee Donald Trump tightening, Clinton’s appearance on the buzz-generating show appeared aimed at showing a more playful side.

Opinion polls show that Clinton has difficulty attracting young voters, a demographic that had strongly supported President Barack Obama. “Not to take away from the historic significance of perhaps you becoming the first female president, but for a younger, younger generation you will also become their first white president, and that’s pretty neat, too,” Galifianakis said.

Clinton, lips clamped into a tight smile, nodded her head as if to say move on.

“As secretary, how many words per minute did you type? And how does President Obama like his coffee? Like himself, weak?” he asked, referring to her stint under Obama as secretary of state.

The host seemed to go too far with a joke about guns. “I really regret doing this,” Clinton said—but she brightened when asked to talk about Trump. “When you see how well it works for Donald Trump, do you think to yourself, oh, well, maybe I should be more racist?” the host said. She grinned, shaking her head as in disbelief.

The host wound up the interview with a sly reference to the scandal that has dogged Clinton’s campaign—her use of a private email server while she was secretary of state, including for classified documents. “This has been a lot of fun, Mrs. Clinton. We should stay in touch. What’s the best way to reach you? Email?”