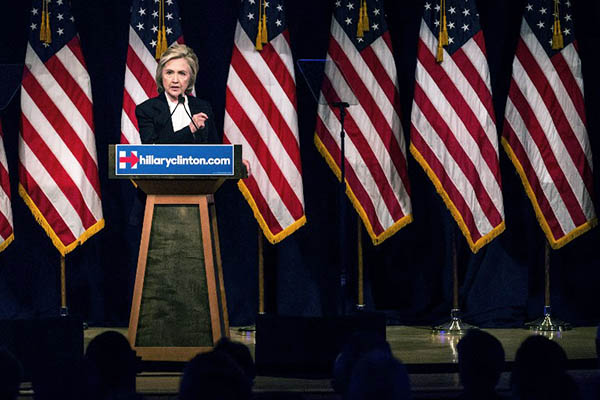 The 67-year-old former first lady, senator and secretary of state spent nearly an hour outlining a three-pronged strategy to boost growth, as unemployment continues to languish above five percent. The speech, her second in New York City in the past month, comes at a time of surging support for her Democratic challenger on the left, Senator Bernie Sanders, and his populist message against inequality.

“The defining economic challenge of our time is clear, we must raise incomes for hard-working Americans,” Clinton told a handpicked audience at The New School in Manhattan’s Greenwich Village. “Inequality is a drag on our entire economy so this is the problem we need to tackle,” she said.

Clinton’s choice of location—a liberal arts college with annual fees of around $60,000—embodied the financial hurdle that millions of middle-class parents face in educating their offspring. But she barely mentioned college debt.

Instead she promised to increase incomes on three tracks: strong, fair and long-term growth in a sweeping vision that drilled down little into substance on how her promises could actually be achieved.

Clinton, who is miles ahead of her rivals in the polls, criticized Republicans for 35 years of “trickle down” economics and derided three of the party’s main contenders by name. She ridiculed Jeb Bush for saying that Americans should work longer hours. Exhausted nurses, teachers and truck drivers “don’t need a lecture. They need a raise,” Clinton said. She said Marco Rubio’s proposed tax cuts for millionaires were a “budget-busting giveaway to the super wealthy” and accused Scott Walker of waging “mean-spirited” attacks on workers.

Walker, the Wisconsin governor who on Monday threw his hat into the crowded ring of Republicans jostling to be the party’s presidential nominee, joined fellow party members in dismissing her speech.

Clinton’s focus on the middle class presents little break with President Barack Obama, her former rival and former boss. Neither were many of her promises new to her three-month campaign. She repeated calls for tax relief for small businesses, investments to create jobs, first-class infrastructure, bolster renewable energy and make it easier for women to join the workforce.

America has dropped from seventh to 19th out of the 24 most advanced nations in terms of women’s labor participation rate, Clinton said, calling for paid leave, affordable childcare and equal pay for women.

Comprehensive immigration reform, she said, would increase GDP by $700 billion over the next decade. She vowed to build on Obama’s Affordable Care Act by lowering out-of-pocket healthcare costs and making prescription drugs more affordable.

Clinton advanced the novel ideal of corporate profit sharing with workers, whose wage increases have been vastly outpaced by stockholders. She also criticized what she called “quarterly capitalism”—when companies focus on the next earnings report at the expense of long-term growth and promised to “rein in excessive risk on Wall Street.”

In reference to well-known banking scandals, Clinton insisted “there can be no justification or tolerance for… criminal behavior.”

Finishing with another swipe at the Republicans, she called for policies based on evidence, not ideology. “We have to break out of the poisonous partisan gridlock and focus on the long-term needs of our country.”

At the end of her speech, a member of the audience who heckled Clinton about banking legislation was swiftly escorted out by security, his cries drowned out by a standing ovation.