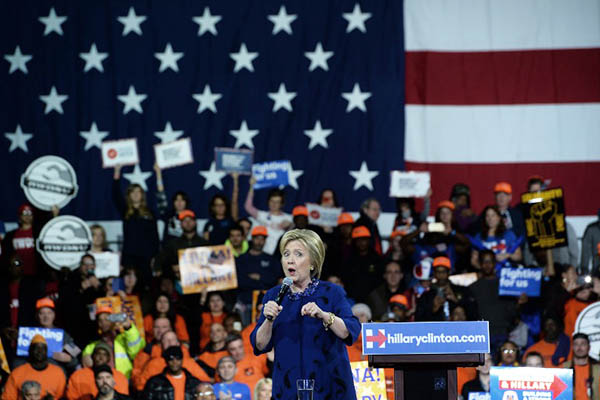 Conventional wisdom says a Donald Trump nomination should bring presidential election gold for Democrat Hillary Clinton—but given how the brash billionaire has outperformed expectations at every turn, it might not be so simple.

Analysts and experts who spoke with AFP acknowledged that Trump’s strong performance on Super Tuesday, when millions of Democrats and Republican voters in a dozen states chose their nominee, put him in the driver’s seat on the road to the GOP nominating convention in July. From there, it would be a head-to-head battle against the Democratic nominee, most likely Clinton, who dominated rival Bernie Sanders in seven of the 11 states where party voters had their say Tuesday.

At first glance, the experience and temperament of a former secretary of state, senator and first lady would be enough to see her soar against a politically untested, deeply controversial billionaire who has yet to flesh out many of his policies. “It certainly would be a good thing” for Democrats, Norman Ornstein of the American Enterprise Institute said about a Trump nomination.

A recent CNN poll showed Clinton beating Trump 52 percent to 44 percent among registered voters in a hypothetical matchup. Other polls have reflected similar results for months. But a November Clinton victory is “no sure thing,” Ornstein cautioned. “Big divisions in the Republican Party are good for Democrats, but that doesn’t mean if Donald Trump is the nominee that there is certainty that he’ll lose.”

Trump has rallied supporters with his politically incorrect talk about immigrants and trade. But he has ruptured the party with his hostility: he has called some Mexicans rapists, urged a ban on Muslims entering the United States, mocked women and the disabled, prompting outcries from establishment Republicans.

Many experts have assumed that Trump’s insults, exaggerations and taunts will hurt him in November. But the 69-year-old real estate mogul appears to operate in an alternate reality, unrestrained by traditional political rules.

This is an election dominated by the unbridled fury at establishment politics. That bodes well for the ultimate outsider who has spent months jabbing a finger in Washington’s eye.

“Trump has broad appeal,” Republican strategist Brad Marston of Massachusetts said. “Yes, he has incredibly high negatives, but both on the left and right, people are tired of their leaders lying to them.”

Clinton meanwhile is the ultimate establishment candidate, who polls poorly with voters on honesty and trustworthiness. Marston points out that there was record turnout in the first four primary races, beginning with Iowa and New Hampshire.

“People are being drawn out of the woodwork to vote for Trump,” and that can happen too in November, he said. But the Republican “train wreck” can also energize Democrats in the presidential election, argued Bakari Sellers, a Democratic former lawmaker in South Carolina’s state legislature.

Clinton has already begun shifting her campaign talk toward the general election. On Tuesday in Minnesota, the 68-year-old assailed Republicans for “running their campaigns based on insults.”

“I don’t think that’s appropriate in a presidential campaign,” she said.

Trump signaled Tuesday he is ready to go to war against Clinton and that their showdown will be “pretty tough.”

Savoring his victories, he signaled he could moderate his tone as he shifts to the general election, even praising the work of women’s health provider Planned Parenthood, which conservatives loathe for its abortion practices. “Planned Parenthood has done very good work for some, for millions of women,” Trump said. “I’m going to be good for women’s health issues. It’s very important to me. Maybe that’s not a perfect conservative view,” he said.

Marston had a message to Democrats: dismiss nominee Trump at your peril. “There’s a good chance he’s being underestimated,” Marston said. “A lot of people doing the estimating don’t like him in the first place.”

The New York Times reported that Team Clinton has begun tailoring a strategy to portray Trump as a heartless businessman, a misogynist, and a dangerous blowhard unfit to be president.

David Axelrod, architect of Barack Obama’s historic 2008 campaign, warned that Democrats must hit Trump on his business record and opportunism, rather than challenge him on the issues. After all, it is an anti-establishment year when rage is the constant. “There are a lot of folks out there who want to deal the system a punch in the face,” Axelrod told Vox, “and Donald Trump is the clenched fist.”