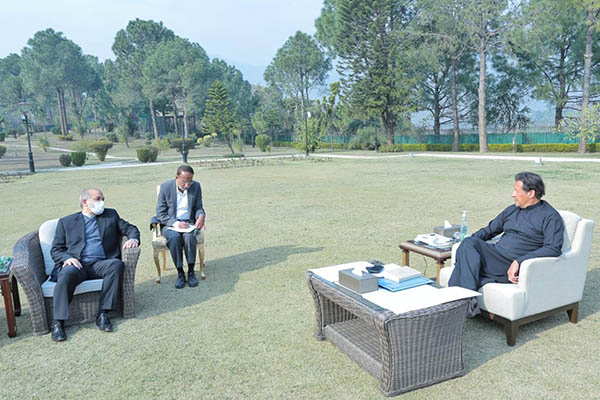 Prime Minister Imran Khan on Monday stressed the importance of close bilateral relations between Pakistan and Iran to boost trade and regional connectivity during a meeting with Tehran’s Interior Minister Ahmad Vahidi, who was in Islamabad for a daylong visit.

According to a statement issued by the Press Information Department, Khan expressed satisfaction over the positive momentum in brotherly relations between the two countries and highlighted the vast potential that exists for enhanced collaboration in diverse fields. He also stressed the early completion and operationalization of border sustenance markets and the economic uplift of the people living on both sides of the border.

Emphasizing that the Pakistan-Iran border was a “border of peace and friendship,” the prime minister said joint cooperation was essential to addressing security issues. He also thanked the Iranian government and the country’s supreme leader for their steadfast support for the just resolution of the Jammu and Kashmir dispute.

According to the statement, Khan expressed satisfaction over the convergence of views regarding a peaceful and stable Afghanistan and underscored the importance of close coordination between Islamabad and Tehran to support the war-torn nation. Stressing a need for the international community to urgently work toward preventing humanitarian crisis and economic meltdown in Afghanistan, he said measures were needed to enhance practical engagement, strengthen stability, and counter terrorism.

The prime minister also reiterated his invitation to President Raisi to visit Pakistan at his earliest convenience.

Vahidi, during the meeting, conveyed the cordial greetings of the Iranian leadership to Khan and reaffirmed Iran’s desire to strengthen bilateral relations in all aspects.

Earlier, Vahidi met his Pakistani counterpart, Sheikh Rashid Ahmed, with both sides agreeing to form joint working groups to strengthen bilateral relations. Both officials also agreed to set up markets on the border and increase the number of border terminals to boost trade.

Both ministers, per a statement, exchanged vides on the Pak-Iran border fence and stressed that their respective territories should not be used for terrorist activities against each other.

Vahidi and Rashid also discussed the regional security situation, especially a potential humanitarian crisis in Afghanistan, and other important issues. “The international community should help the Afghan people as severe scarcity of resources could lead to a humanitarian crisis in that country,” Rashid was quoted as saying, adding that Pakistan would continue to play its role for lasting peace in the region and welfare of Afghan people.

Both leaders also reviewed prisoner exchanges and facilitating pilgrims from Pakistan to Iran, as well as means to prevent illegal human immigration and drug trafficking.

Rashid, according to the statement, thanked Iran for supporting Pakistan’s position on India-held Kashmir.

The Iranian minister and his nine-member delegation also visited General Headquarters in Rawalpindi for a meeting with Chief of Army Staff Gen. Qamar Javed Bajwa.

According to a statement issued by the military’s media wing, the Army chief and the visiting dignitary discussed the geostrategic environment, with a focus on the regional security situation and bilateral cooperation in defense and security domains. It said Gen. Bajwa had stressed that enhanced cooperation between the two brotherly neighbors was vital for peace and stability in the region.

Vahidi, meanwhile, acknowledged that a stable Afghanistan was a collective regional responsibility, and appreciated Pakistan’s efforts for peace and stability, especially in securing humanitarian aid for the people of Afghanistan.