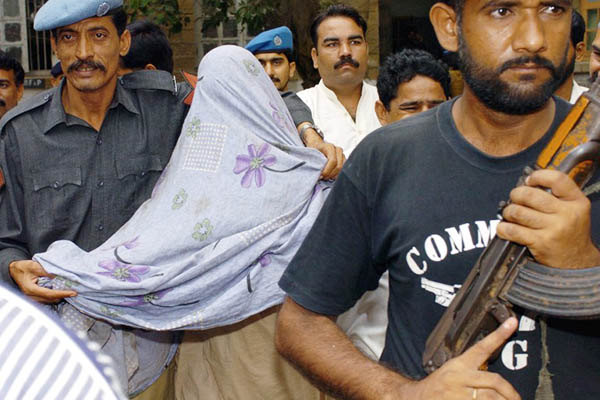 Qari Hashim was taken into custody in 2005. Aamir Qureshi—AFP

Qari Hashim had been arrested for introducing Pearl to extremist Omar Sheikh.

An anti-terrorism court has acquitted a co-accused in the 2002 murder of U.S. journalist Daniel Pearl due to lack of evidence, lawyers said on Friday.

Qari Hashim was arrested in 2005, three years after the main accused were convicted for the abduction and beheading of Pearl, a Wall Street Journal reporter. The prosecution had no “valid witness in proving the role of my client in the Pearl case,” defense lawyer Sher Mohammad Leghari told AFP.

Pearl, 38, was the South Asia bureau chief for The Wall Street Journal when he was abducted and beheaded in Karachi in 2002, while researching a story about Islamist militants. A graphic video showing Pearl’s decapitation was delivered to the U.S. consulate in the city nearly a month later.

British-born extremist Omar Sheikh was arrested in 2002 and sentenced to death by an anti-terror court, while three other co-accused received life imprisonment. Sheikh and his accomplices filed an appeal in the Sindh High Court, challenging the verdict. The cases are still pending in court.

Hashim was accused of introducing Pearl to Omar in the course of his journalistic research.

In January 2011, a report released by the Pearl project at Georgetown university following an investigation into his death made chilling revelations when it claimed that the wrong men were convicted for Pearl’s murder. The investigation, led by Pearl’s friend and former Wall Street Journal colleague Asra Nomani and a Georgetown University professor, claimed the reporter was murdered by Khalid Sheikh Mohammad, the alleged brains behind the September 11, 2001 attacks, not Omar Sheikh.

Self-proclaimed 9/11 mastermind Khalid Sheikh Mohammed was arrested in Pakistan in 2003 and is being held in Guantanamo Bay, Cuba, awaiting trial by a U.S. military tribunal.