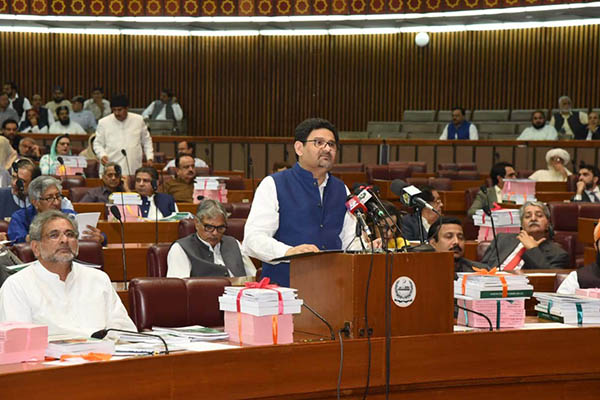 The incumbent coalition government on Friday unveiled a Rs. 9.5 trillion budget for fiscal year 2022-23, with Finance Minister Miftah Ismail saying it was aimed at stabilizing the ailing economy and controlling rampant inflation. However, the stabilization measures are likely to provoke further price hikes, raising questions about its efficacy for the general public.

Unlike previous budget speeches, which tended to be marred by opposition sloganeering and protests, this year’s address saw no resistance from the “friendly” opposition, comprised mostly of dissident lawmakers of the Pakistan Tehreek-e-Insaf. Stressing that the incumbent government was continuing the projects launched by the ousted PTI regime, Ismail nonetheless criticized the policies of his predecessor, lamenting that it had not focused on inclusive growth and had resulted in record inflation.

“The problem of our economy is that growth is 3-4 percent, but when it moves up to 5-6 percent, our current account deficit goes out of control, because we prioritize the elite and increase our imports to facilitate them,” he said. “We need to adopt a new outlook focused on alleviating the lower-income sections of society to increase domestic production,” he said, adding that the government wanted to encourage local production.

“We will increase the agricultural production to increase arable produce and increase per acre yield while also focusing on the development of industries, which can help increase the exports of the country,” he said, stressing that Prime Minister Shehbaz Sharif wanted to provide maximum relief to the public through targeted subsidies.

“The series of difficult decisions is not complete yet,” he warned, adding the aim was to convert the primary deficit into primary surplus. Admitting that the increase in energy and fuel prices would boost inflation, he said this was necessary to overcome the “devastation” caused by the previous government’s mismanagement.

According to the finance minister, the Federal Board of Revenue (FBR)’s collection target for the next fiscal year was Rs. 7,004 billion, with the provinces to collect Rs. 4,100 billion. He said the federal government’s net revenue was projected to be Rs. 4,904 billion, with non-tax revenue forecast to be Rs. 2,000 billion, against expenditures of Rs. 9,502 billion. He said Pakistan would have to spend Rs. 3,950 billion on debt servicing. He said public debt of the outgoing fiscal year was 72.5 percent of the GDP, having hit Rs. 44,365 billion in March 2022.

Among the revenue generating measures, he said, tax imposed on non-filers would be doubled. The new budget, he said, was proposing increasing the rate of advance tax on purchase and sale of property for filers from 1% to 2%, and for non-filers to 5%.

In a move toward taxation of landholdings, Ismail said any person with immovable property valued at Rs. 25 million or higher would be considered to be earning additional income to the tune of 5% of its value. He said the government would charge 1% tax on this income, adding that a person who holds immovable property for more than a year would be charged with 15% capital gain tax that would reduce to 0 after six years.

As part of the targeted subsidies proposed by the government, the total allowance for the Benazir Income Support Program (BISP) for the incoming fiscal has been proposed to be increased from Rs. 250 billion to Rs. 364 billion. As part of this, Ismail said, nine million impoverished families would receive direct deposits through the Benazir Kafalat Cash Transfer Program with allocation of Rs. 266 billion. Similarly, he said, the subsidy for the Utility Stores Corporation would be increased to Rs. 12 billion.

The minister said the Benazir Taleemi Wazaif Program would be extended to 10 million children against allocation of Rs. 35 billion; over 10,000 students would be granted undergraduate scholarships against allocation of Rs. 9 billion. He said the Benazir Nashonuma Program would be extended to all provinces with funding of Rs. 21.5 billion, adding that the Baitul Maal would allocate Rs. 6 billion for the medical treatment of impoverished.

Ismail said Rs. 65 billion had been allocated for the Higher Education Commission in addition to Rs. 44 billion for development projects. “We are trying to convince provinces to increase focus on the development of higher education,” he said.

On energy, the minister stressed that improving production, transmission and distribution of electricity was a priority for the incumbent government and Rs. 73 billion had been allocated to achieve this, including Rs. 12 billion to expedite the construction of the Mohmand Dam.

He said Rs. 71 billion had been allocated to pay arrears of the petroleum sector, adding the gas rate for the industrial sector would be announced soon. The government, said Ismail, had allocated Rs. 214 billion in additional subsidies for the first three months of the incoming fiscal to reduce the burden of electricity tariffs on the public. In total, he said Rs. 570 billion had been allocated for the energy sector.

In a key move, the finance minister said the annual income tax threshold had been raised from Rs. 600,000 to Rs. 1.2 million, adding this meant there was effectively no income tax on individuals earning up to Rs. 100,000 a month. The government has also proposed increasing the tax on banking companies to 39 percent, including 42 percent super tax.

He said foreign nationals doing business in Pakistan would also have to pay taxes, adding the focus was on increasing taxes on non-filers, including doubling taxes for vehicles over 1,600cc. The government has proposed an advance tax on 1,600cc cars and a 2% additional tax on electronic engine cars, he said, while noting that the tax on Behbood Saving Certificate and Pensioners Benefit Account had been dropped from 10 percent to 5 percent.

Ismail said the government was fixing tax on small-scale retailers, within a range of Rs. 3,000-10,000, adding this would be added to their electricity bills. He said filers who send money abroad through credit, debit, or prepaid cards would have to pay 1% withholding tax, while non-filers would be charged 2% tax, he said.

The finance minister said the government has proposed granting loans on easy installments to families using less than 200 units of electricity for the purchase of a solar panel. The government is also considering abolishing sales tax on agricultural machinery and seeds, he said.

On the health sector, Ismail said the proposed budget for the health sector would be over Rs. 24 billion, less than the outgoing fiscal. Among the PTI-led projects that are continuing is the Naya Pakistan Housing Authority, which has been allocated Rs. 500 million, compared to Rs. 30 billion in the outgoing fiscal. The minister also said that non-resident Pakistanis would be required to become a taxpayer in Pakistan unless they were tax residents in their country of residence.

The defense budget has witnessed a massive hike of nearly 11%, going from Rs. 1.37 trillion to Rs. 1.523 trillion. Troubling for inflation rates, the government has set a non-tax revenue target of Rs. 750 billion through the petroleum development levy, up almost 455 percent from an estimated collection of about Rs. 135 billion during the current year.