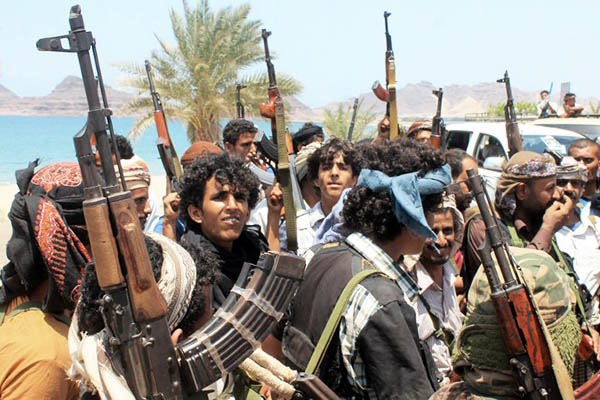 Saudi-led coalition airstrikes resumed against rebel positions in Yemen’s south after a five-day ceasefire expired late Sunday, despite a U.N. envoy’s calls for an extension of the truce.

The humanitarian ceasefire that began late on Tuesday expired on Sunday with no word from the coalition, which had repeatedly accused the rebels of “violations,” on where the truce stands. An hour after the deadline, air raids hit the rebel-held presidential palace in Aden as well as a base of the pro-rebel special forces in the same city, military officials and witnesses said.

The raids came despite calls by U.N. envoy to Yemen Ismail Ould Cheikh Ahmed to extend the ceasefire. “I call on all parties to renew their commitment to this truce for five more days at least,” Ould Cheikh Ahmed said earlier in Riyadh. “This humanitarian truce should turn into a permanent ceasefire.”

His appeal followed clashes between rebels and pro-government forces across south Yemen on Saturday despite the truce, which has largely held since starting on Tuesday. The official Saudi Press Agency reported that the U.N. envoy met Saudi chief of staff Lieutenant General Abdulrahman bin Saleh al-Bunyan and discussed “humanitarian aid efforts” in Yemen.

Aid groups have called for a lasting truce in the impoverished country, where a Saudi-led regional coalition has waged an air war on Iran-backed Houthis and their allies since late March. Yemeni political parties began talks Sunday in the Saudi capital aimed at finding a solution to the crisis. But the Houthis stayed away from the meeting of some 400 delegates including President Abedrabbo Mansour Hadi, who has taken refuge in Riyadh.

Hadi repeated accusations that the rebels had staged a “coup.”

“We are trying to regain our nation” from militias backed by “external” forces, he said in a reference to Iran, which has denied arming the rebels. An Iranian aid ship bound for Yemen in defiance of U.S. warnings has entered the Gulf of Aden and is expected to dock on Thursday, media in Tehran reported. Its mission has been overshadowed by U.S. calls for it to head to a U.N. emergency relief hub in Djibouti instead of the Yemeni port of Hodeida.

Clashes raged overnight Saturday in Taez between Houthis—supported by troops loyal to ousted president Ali Abdullah Saleh—and pro-Hadi forces. The rebels, who seized Sanaa in September and have since swept across many other regions, bombed a village south of Taez, killing 14 civilians, a local official said.

Sporadic clashes also continued in Aden, the scene of fierce fighting since rebels advanced on the southern port in late March after Hadi took refuge there.

Aden health chief Al-Khader Laswar said four people were killed in clashes Sunday and 39 were wounded, among them two children and four women. Laswar has said that 517 civilians and pro-Hadi fighters have been killed there in the past 50 days. The toll includes 76 women and children, he said.

Quoted by the government news agency Sabanew.net, Laswar said he could not provide a toll for the rebels. He added that 3,461 people were wounded, and said most Aden hospitals were currently out of service as “most” medics have fled.

The United Nations has expressed deep concern about the civilian death toll from the Saudi-led bombing as well as the humanitarian impact of an air and sea blockade imposed by the coalition. It says more than 1,600 people have died in the conflict since late March.

Some aid has trickled in since the pause in fighting, but residents of areas where clashes persist complain that they lack the most basic supplies. The U.N. children’s agency (UNICEF) said in a statement it was “distributing critical humanitarian aid for hundreds of thousands of children and affected civilians across Yemen.”

“In the past four days of the pause, UNICEF has prepositioned supplies in health offices and centers which will provide primary health care to over 24,000 people and treat 3,500 severely malnourished children,” it said. But in the south, “distribution and services have been slow as a result of the continuing violence.”

Sanaa residents echoed calls for a ceasefire extension. “We don’t care about food or water as much as we need security. We hope that this truce becomes permanent,” said Umm Hisham.

But in the southern city of Daleh, people said the rebels exploited the truce. “The Houthi militia exploited the ceasefire to bomb citizens… We want coalition forces to resume attacks on these militia,” said Ali al-Assmar. “We are not benefiting from the truce. The humanitarian aid for Daleh was confiscated by Houthis and Saleh forces,” he said.

The Houthis are boycotting the three-day meeting in Riyadh, insisting that the talks be held in Yemen instead. However, Yemen’s Vice-President Khaled Bahah told AFP that he expected the Houthis would attend future talks, and several representatives of Saleh’s General People’s Congress party did attend.