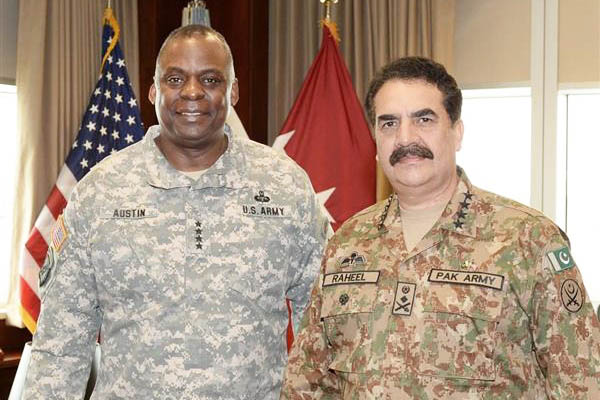 Gen. Raheel Sharif will meet senior U.S. military officials, including the army chief, during his visit.

Pakistan’s Army chief is holding talks with top U.S. generals and officials this week in the first visit to the United States by the country’s military commander in four years, officials said Monday.

Gen. Raheel Sharif’s trip comes against the backdrop of improved relations between the two governments with Washington encouraged by Pakistan’s offensive against Islamist militants in the country’s northwest.

After arriving in Washington on Sunday, Sharif held talks at U.S. Central Command in Tampa, Florida on Monday and was scheduled to meet the U.S. Army chief, Gen. Ray Odierno, the chairman of the U.S. Joint Chiefs of Staff, Gen. Martin Dempsey and the deputy defense secretary, Robert Work, over the next two days, said U.S. officials.

It was Sharif’s first trip to the United States since he took over the post in November 2013, and the first of any Pakistan Army chief since 2010. Sharif’s predecessor had an often tense relationship with Washington amid accusations Islamabad was failing to take action against Haqqani extremists and other insurgents based in Pakistan that orchestrate attacks on American and NATO troops in Afghanistan.

A senior U.S. officer in the NATO-led force in Afghanistan, Lt. Gen. Joseph Anderson, told reporters this month that Pakistani military operations in North Waziristan had “fractured” the Haqqani network. The Pakistani military campaign “has very much disrupted their efforts here and has caused them to be less effective in terms of their ability to pull off an attack here in Kabul,” Anderson said by video link from Kabul.

U.S. officials are also hopeful that a new president in Afghanistan, Ashraf Ghani, can bolster cooperation and dialogue between Kabul and Islamabad, just as NATO’s U.S.-led force withdraws from the fight against the Taliban.