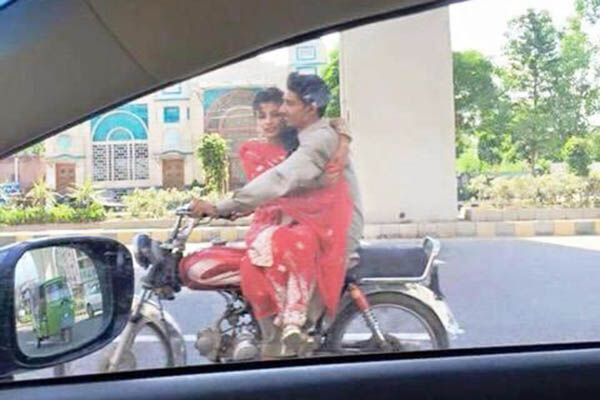 Social media’s response to a picture of a couple astride a motorcycle speaks volumes about Pakistani society.

This is the story of a picture. And of a tweet.

I found the picture on the Internet, perchance. It shows a man and a woman riding a motorcycle, with the woman side-saddled and sitting in the driver’s lap. The tweets and the comments, from both men and women, for the most part castigated the two for being shameless. It was taken for granted that they were lovers and indulging in a public display of affection, an act found smutty and rejected by this society, which, nonetheless, revels in and, often, commends the obscenity of violence and other sundry vulgarities and grotesqueries.

Other possibilities, the couple being married or the two being siblings or the woman sitting the way she was because there might be some reason for doing so were all ignored. The interesting thing is that if the woman in the picture were given to breaking the taboos, she would have sat astride rather than aside, which is the silly standard here because, so the thinking goes, that a woman must keep her legs tightly squeezed in public.

I decided, on an impulse, to tweet the picture, taking just one possibility, deliberately, of their being lovers and commended them on their public display of affection in a society that needs more ‘obscenity’ of the human kind than the vulgarities on display in the name of pieties.

The response was overwhelming. And while the majority supported them, there were other responses too. Let me consider them.

One was of course about bay-hayaee, the shameless couple needed to be chided and brought back into the fold rather than being celebrated. For these people, the social nuisance factor of a man and a woman holding hands or embracing each other in public is of course much greater than frothing-from-the-mouth clerics instigating people to go out and kill others. It’s the same thought that runs through our film censor boards where any physical act of affection must be cut out while scenes of gory violence can be kept without any warning to parents about that content.

Among this crowd of high priests of morality, a few wanted to get a rise out of me and asked if I’d celebrate this shameless couple if the girl in question happened to be my sister or daughter. I was expecting it. It is usually at this point that our society’s high morality reaches its lowest point. As a man I am supposed to treat my daughter or my sister as my property and if I am to approve of their ‘shameless’ behavior then I am not man enough. That, supposedly, must get me going because the one thing a man cannot accept is the tag of being unmanly. Generally, this desire to be accepted as men and manly is to be found in those males that have nothing much to recommend them on that front and comes into play vis-à-vis the women and the weak. Put them to other tests of courage, both physical and moral, and they are likely to come up terribly short on all counts.

A few—more enlightened and sticklers for traffic rules and safety—cautioned me against celebrating a picture where the two riders were not wearing helmets and the ride could result in a tragedy. While their concern on this count is to be appreciated, they totally missed the broader point I was trying to make. They belonged to the tribe who would tell a poet that his likening of the beloved’s face to the moon is scientifically flawed because the moon is all cratered.

A few others chided me for barging into the couple’s private space, taking it for granted that I had snapped the picture and then tweeted it. While their concern must be appreciated because with it are linked some tough questions, the tone of their tweets to me gave out the same odor of high priesthood on which the moral brigade thrives. There’s delicious irony here, dear reader, and one that must not be lost on the more discerning.

Finally, there were others who said the woman had some disability and this is the only way she could travel. That, if they had more money, she would probably be in the backseat of a car. Fair enough. I don’t know the source of this information, but they could well have got it right. That said, this ‘fact’ again missed my parsimonious approach to the picture as a social metaphor, which is now the prompt for this short piece.

But there are other lessons in this too. One of them relates to cognition, psychologists’ difficult way of referring to how we think, reason and deconstruct, and how we are predisposed to certain interpretations given the ruts we all create and wherein we reside comfortably. No one is without that comfort. It’s like Pinter’s The Room, flush with the ‘comedy of menace’ and our insecurities. The Room binds us but it also liberates because without is menacing.

Art Markman, a psychologist at the University of Texas, says: “When you ask most people to do something creative, they quickly get stuck in a rut. Studies by The University of Alabama’s Thomas Ward and his colleagues asked college students to draw animals from alien planets. Nearly all the animals people drew resembled real ones from Earth. They had similar sensory organs, legs, and arms and were symmetrical. Even when asked to be creative, people based their work on known examples.”

The cognitive responses from the people, often nurtured by dumb or (non)thoughts, are most glaringly at display on social media reactions and commentary. While I took one angle to the picture to present my view on what I think is wrong with us by using the picture as a contrast, the principle to be used for the Internet is to be always skeptical unless one is absolutely sure of the information. The picture could have been a fake or photoshopped. But it served my purpose and I used it. And, in the process, I got the responses and this piece!

That’s not a bad way to start a rainy, lazy day, thank you!

This piece is valuable social commentary in present day Pakistan. I (think I) understand the point you are making. However, your rebuttal to the criticism to this tweet raises two questions for me:

1) Censorship is applied in varied contexts – to violence and gore, explicit sexuality and other acts on public display that are deemed to be inappropriate viewing for the members of the society in question. Just because censorship is weak, inadequate or inconsistent in one area (violence, gore etc) doesn’t mean its (supposedly) correct applicability in another area (sexuality) should be questioned. I am not saying this (supposedly/might be) public display of affection should be censured/qualifies as inappropriate but feel that your argument of inconsistency/hypocrisy is a straw man.

2) The tone or the manner in which people express there discontentment should not take away from the point they are making. You did invade someone’s private space. That is a fact – I bet you wouldn’t think twice about doing this in a country where privacy is respected. The very moral/mullah brigade that you are criticizing does the same thing – poke into other people’s life’s by shoving morals/religion down their throat.

These people … referring to those they disagree with some derogatory term. People should understand that “M’Ullah” contains within it Allah’s name, whatever your level of bay-hayaee (there is such a thing you know), surely you would do well to avoid creating an insult out of Allah’s name. I for one welcome the fact that Pakistanis get up and shout about bay-hayaee, I mean it’s everywhere, and I would say it’s the besharm whose mouths froth lustily at the sight of increased besharmee. I don’t see anyone condoning violence – it’s just that dealing with voilence is a far greater struggle. But just because people have violence and other ills to deal with, doesn’t mean they should keep quiet about the other things our Prophet SAW warned us against.