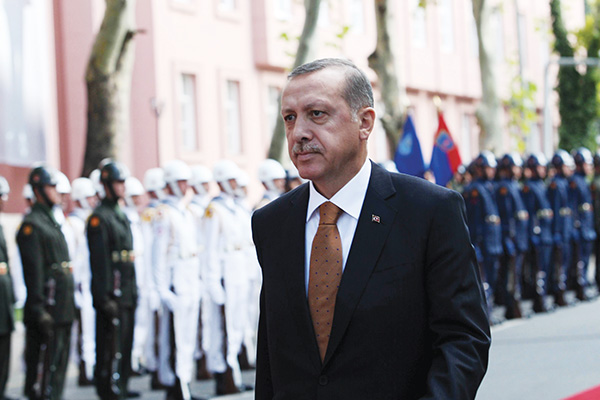 Prime Minister Recep Tayyip Erdogan has long been essential to President Barack Obama’s strategy in the eastern Mediterranean and the Middle East. And although Erdogan boasts the second largest army in American-led NATO, he is currently exploring new alliances with some of America’s main commercial and political competitors, and enemies.

By reaching out to China and Iran, Erdogan is expressing his disappointment at America’s perceived withdrawal from the region, according to some analysts. He has snubbed advances from America’s arms manufacturers, hosted top officials from Tehran, and deepened a rift with former ally Israel. Others believe the prime minister is returning to his former policy, long considered a failure, of seeking ties with everybody in the neighborhood and beyond.

But recent dramatic shifts in policy may also be part of Erdogan’s search for a new political role, steering Turkey away from its century-long secularism and toward a new model in which Islam trumps Western-style democracy and Turkey moves from being just another member of NATO to a power in its own right.

Erdogan had been quick to develop a relationship with Obama, who saw the policies of his Islamist Justice and Development Party (AKP) as a model for how Islam and democracy can coexist. But Erdogan was unhappy about Obama’s reluctance to intervene in Syria’s civil war and some of his latest diplomatic moves have arched eyebrows in Washington.

“Relations remain good,” says Steven Cook of the Council of Foreign Relations. But, he adds, a nagging question now arises in Washington: “What is it that Turkey provides?”

As Ankara seeks new alliances, Erdogan’s opponents, both inside and outside the country, point to his “neo-Ottomanism.” Foreign Minister Ahmet Davutoglu, a former academic who is the main architect of the AKP’s foreign-policy shifts, often invokes the memory of the old Ottoman Empire, complete with dropping the names of the empire’s major outposts: “Without going to war, we will again tie Sarajevo to Damascus, Benghazi to Erzurum and to Batumi.”

There are many signs of Turkey’s departure from the century-old traditions established by the founder of modern Turkey, Ataturk, who turned the country into an outward facing, secular, Western-friendly state in the aftermath of the Ottoman defeat in World War I. Erdogan is so hostile to Ataturk, he can’t even bring himself to utter the words Istanbul Ataturk Airport. Recently, in another sign of Turkey’s new direction, Erdogan clashed with students in Istanbul who were afraid he would outlaw mixed-sex apartment-sharing, which is seen by some in his entourage as sinful and un-Islamic.

Meanwhile, Davutoglu’s early idea of where the future of Turkey lies with the promise of “zero problems with all our neighbors” has not materialized. Such a foreign policy looked good on paper and it was welcomed by the Western press, noted Razi Canikligil, a New York-based reporter for Turkey’s Hurriyet. But now, “All I see in the American and European media is criticism of Erdogan’s foreign policy,” he says.

“Zero problems” have turned into lots of problems: Erdogan remains intent on unseating Syria’s President Bashar al-Assad, who was one of his early allies; Erdogan continues to strongly support Egypt’s Muslim Brotherhood, which has pitted Turkey against the current Egyptian ruler, Gen. Abdel Fattah al-Sisi; Turkey is viewed with suspicion by the Palestinian Authority because of its strong backing of their mortal rival Hamas; and relations with Saudi Arabia have also cooled off, partly because Sunni-majority Turkey has started repairing ties with Shia powers, including in Iraq and Iran.

“Some circles may want to represent us as two rival neighbors. Some may desire it,” Davutoglu declared during a much-ballyhooed joint press conference in Istanbul with Iran’s foreign minister, Javad Zarif, on Nov. 1. “On the contrary, Turkey and Iran are not rivals but friends.” In the West, the thawing of relations between Iran and Turkey is seen as part of a troubling trend. It came after Ankara stunned Washington and other NATO allies by signing a $3.4-billion deal with a Chinese company to build a missile defense system.

Turkey is viewed with suspicion by the Palestinian Authority; relations with Saudi Arabia have also cooled off.

Preferring China Precision Machinery Import and Export Corp. to U.S. manufacturers Raytheon and Lockheed Martin certainly caught Washington’s attention, not least because the Chinese-made system is incompatible with NATO air defenses imminently due to be deployed in Turkey. To add insult to injury, the Chinese manufacturer is already on the American sanctions list for violating longstanding embargoes against Iran and North Korea. “We are seriously concerned about what this means for Allied missile air defense,” Francis Ricciardone, the American ambassador in Turkey, said recently.

Turkey has long aimed to establish itself as an independent arms supplier, at times running afoul of the strict restrictions that accompany American arms sales to foreign countries. As far back as the 1960s, President Lyndon Johnson told Turkey it could not use NATO arms in its war in Cyprus, notes Soner Cagaptay of the Washington Institute for Near East Policy. Turkey has therefore tried to get arms from non-Western manufacturers for a long time, he said. But, he added, the timing of Ankara’s decision to do such a prominent deal with the Chinese company has to do with its irritation over America’s inaction in Syria. “This is a result of Turkey feeling lonely,” says Cagaptay. “Ankara is exposed to the fallout of the Syrian war and it has not been able to get American firepower to oust Assad.” And so, he concludes, Erdogan, realizing Assad may remain in power, is turning to Iran to help sort things out in Syria.

This decision may have further soured the long-deteriorating relationship between Erdogan and Israel. Last month The Washington Post columnist David Ignatius reported that Ankara’s intelligence officials have disclosed to their Tehran counterparts the identities of Israeli-recruited agents working in Iran, after the spies met with their Israeli controllers on Turkish soil. “This is a despicable act,” said Danny Yatom, the former chief of Israel’s Mossad intelligence agency. Stressing that he only knows about the incident from press accounts, Yatom added that if true, Turkey could only have learned about the agents from the Israelis. (Allied intelligence agencies customarily inform each other about contacts conducted on each other’s soil.)

Turkey denied Ignatius’s report, but Davutoglu stressed in his Istanbul press conference with Zarif that “the Turkish government has never cooperated with Israel against any Muslim country—and it never will.” Yatom predicts that the reported incident will come to haunt Turkey as allies balk from sharing intelligence with it in the future. Israel, he says, has only a few ways of getting back at Turkey. “We won’t do the same to them,” he says, but adds that Israel must “call on countries to reassess intelligence sharing and urge the Americans and NATO to cool relations with Turkey as result of this.”

In light of his ever-shifting policies, much of the early promise Westerners saw in Erdogan has fizzled. In Turkey, too, his violent clampdown on the Gezi Park demonstrators last summer disappointed many former supporters. He may thus have jeopardized his plan to strengthen the powers of the country’s presidency and run for that office when his term-limited premiership ends in 2015. Erdogan may be down, at least for now, but “I’d never count him out,” says Cook. “He’s too good a politician.”