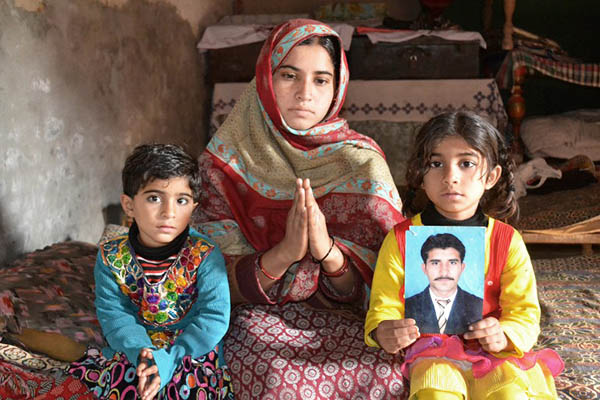 The wife of Mohammad Irfan, a Pakistani sentenced to death in Saudi Arabia for drug trafficking, appeals for his release on Dec. 2, 2014. Ali Turab—AFP

Five years ago, a 50-year-old farmer from Punjab province’s Khushab district, Asmat Hayat, was offered a free trip to Saudi Arabia to perform Hajj. Overjoyed at the chance to fulfill a religious obligation he could otherwise never afford, Hayat readily accepted. That was the last time his family saw him.

According to his brother, Hayat’s free ride was anything but. He says the sponsor, a licensed overseas employment promoter, forced Hayat to swallow a string of heroin capsules en route to the airport, threatening to kill his family if he did not comply. He was then placed on a plane to Saudi Arabia where he was immediately arrested, tried and sentenced to death in Jeddah. He has been on death row ever since.

The family has filed complaints with government officials, protested in front of Parliament and even staged a sit-in outside the Islamabad Press Club. Their actions have been met with an indifferent silence. “He has six children, and a wife who has lost her senses [because of her grief],” the brother, who wishes to remain anonymous, told Newsweek. “We don’t know what to do.”

Saudi Arabia has executed 18 Pakistanis since October 2014. All 18 were charged with drug trafficking and publicly beheaded as per the kingdom’s shariah law. But rights groups claim the majority of the men were innocents—mules used by drug lords who remain unaffected. According to the United Nations Office on Drugs and Crime, 40 percent of all illicit opium produced in neighboring Afghanistan ends up in Pakistan. In its quarterly report, the country’s Anti Narcotics Force claims it seized 15,000kg of hashish, 7,399kg of opium, 1,861kg of heroin, and 1.6kg of cocaine in 245 raids between May and July 2014. Only 49 of these seizures took place at airports. There are no estimates of how many people might evade detection, nor of how many could keep facing the gallows if the Government of Pakistan does not act—soon.

Lahore-based Justice Project Pakistan, a human rights law firm, has demanded the government protect its citizens and has filed a petition at the Lahore High Court on behalf of the prisoners’ families. “When Pakistanis anywhere are suffering human rights abuses, the government has a constitutional duty to help,” says the organization’s legal director, Maryam Haq. “This can’t just keep going on unchecked.”

Haq says death row inmates have no access to legal counsel unless they can afford it, which many cannot. Most of the drug mules are poor and illiterate and court hearings in Saudi Arabia are conducted entirely in Arabic. While state-appointed translators are provided to some prisoners, their pay is conviction-based, incentivizing death sentences. “There have been instances where translators have relayed the exact opposite of what the prisoner has said to the judge,” says Haq, adding that executions are conducted without any notice. “They [Saudis] are obligated to send the bodies back, but they don’t do that either,” she added.

Saudi Arabia’s strict interpretation of shariah law does not leave much room for debate and its human rights standards are notoriously poor. Drug trafficking is one of 20 crimes that are punishable by death. Last year, the kingdom beheaded 87 Saudis and foreigners. This year, it executed nearly 20 in January alone.

U.N. Special Rapporteur on Torture Juan Mendez says he has expressed concern over many Saudi executions. “In each of them [the government] denied the facts or disagreed that they constitute a human rights violation,” he tells Newsweek. His appeal to Saudi Arabia last year to place a moratorium on the death penalty has also gone unanswered.

According to Mendez, international standards demand the death penalty only be applied on the most serious of crimes. In addition, the judicial proceedings must be conducted in a language the defendant understands, free counsel must be provided, and trials should adhere to due process and an appeals process. The international community largely agrees that beheading is demeaning, humiliating and painful, he added.

Mendez says the Saudi government has told him that foreign defendants are afforded access to consular protection in accordance with the Vienna Convention. “Some consular officials take this job seriously, and others do not,” he says. “What is especially outrageous of the Saudi death penalty as applied to foreigners is that some countries are allowed to offer ‘blood money’ in exchange for commutation of the death penalty applied to one of its nationals,” he says.

There are approximately 700 Pakistani prisoners in jails across Saudi Arabia, says Ministry of Foreign Affairs spokesperson Tasnim Aslam, at least 30 of whom are currently on death row. Legal consultants and translators are available to help, she says, adding that embassy and consulate staff also visits them. The Pakistan mission in Saudi Arabia has issued emergency passports to prisoners, and negotiated early release of people who have completed their sentences, she says, adding that Pakistan paid Rs. 3.8 million in 2013, and Rs. 7.6 million in 2011 to bail out prisoners.

However, rights activist Ansar Burney says these figures are wrong, claiming he is aware of at least 50 Pakistani prisoners on death row in the Gulf kingdom. “It’s shocking that the government is unmoved by the executions,” Burney tells Newsweek. “These drug mules are innocent folks. How can illiterate workers who have never left their villages before and have no idea what drugs are, willingly partake in drug trafficking?”

According to Burney, Pakistan needs to crackdown on drug mafias within its borders to curtail the problem. Simultaneously, he says, Saudi Arabia should look into the identity of the people that receive deliveries from Pakistanis. “If the Saudis are protecting their people, why can’t we protect ours? Is Pakistan’s government silent on the issue because it gets money from Saudi Arabia?”

Pakistan and Saudi Arabia have an extradition treaty, but it does not encompass sentenced convicts. “An agreement on transferring sentenced prisoners is being negotiated,” says the foreign ministry’s Aslam. But time is running out for the men on death row.

The Justice Project Pakistan’s plea before the Lahore High Court is still pending after a hearing scheduled for Jan. 16 was postponed. In the previous two hearings—on Dec. 16 and 26—the government requested more time to file a response. Eight Pakistanis have been beheaded in that time. If the execution rate remains steady, says Haq, it could be too late. “We’re hoping the court can enforce the government’s duty so we can find out what’s going on.”