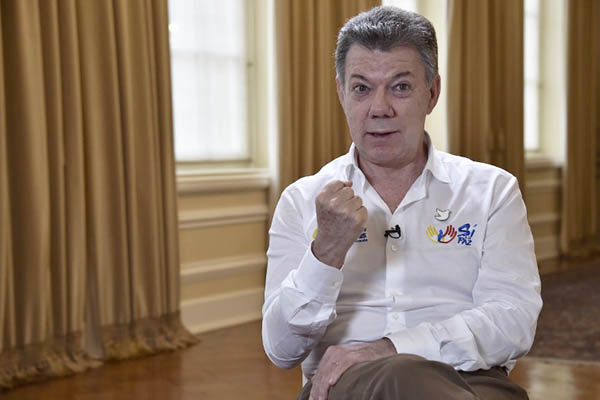 Colombia’s President Juan Manuel Santos won the Nobel Peace Prize on Friday for his efforts to end a half-century war with the FARC rebels, pledging to salvage a peace deal rejected by the people.

The award was a surprise, coming just five days after Colombian voters shot down the historic accord Santos signed last month with the leader of the Revolutionary Armed Forces of Colombia (FARC), Timoleon “Timochenko” Jimenez. But the prize appeared to encourage the peacemakers, with the government and rebels vowing to continue a ceasefire and discuss changes to the agreement “to give guarantees to all.”

The Norwegian Nobel committee said the award recognized Santos’s “resolute efforts” to bring Latin America’s longest war to end, and hailed his decision to put the peace deal to the people despite knowing it was controversial. Some observers expressed surprise the FARC leader was not jointly honored by the award.

But FARC leader Jimenez, whose real name is Rodrigo Londono, congratulated his former enemy and said the only prize the Marxist guerrillas wanted was “peace with social justice for Colombia.”

Nobel committee chairwoman Kaci Kullmann Five paid tribute to other players in the peace process, without mentioning the FARC. “By awarding this year’s Peace Prize to President Juan Manuel Santos, the Norwegian Nobel Committee wishes to encourage all those who are striving to achieve peace, reconciliation and justice in Colombia,” she said.

The deal, signed with pens made from bullet casings on Sept. 26 after nearly four years of talks, was supposed to be ratified in an Oct. 2 referendum. But voters rejected it, leaving Colombia teetering between war and peace.

The Nobel committee said the award’s aim was to bolster peace efforts that were now in “real danger” of collapse.

Santos said he was honored by the award, which he dedicated to “all Colombians, especially the millions of victims of this conflict that we have suffered for more than 50 years.”

In remarks to the Nobel Foundation, the 65-year-old also said the award was “a great stimulus” in the quest for peace. “The message is that we have to persevere and reach the end of this war. We are very, very close, we just need to push a bit further.”

Colombia’s five-decade conflict has killed more than 260,000 people, left 45,000 missing and forced nearly seven million to flee their homes. Under the deal, the FARC was to relaunch as a political party. But rightwing hardliners led a campaign against the accord, arguing it offered the rebels impunity for massacres, kidnappings and other crimes committed during the conflict.

A divided Colombia had mixed reactions to Santos’s win.

Jose Alberto Soriano, an 18-year-old whose grandfather was killed by the FARC in 1991, said he disagreed with the Nobel committee’s decision because Santos was too soft on the rebels. “They kill families, and we’re supposed to get down on our knees for them,” he said.

Since Sunday’s referendum defeat, Santos has opened a national dialogue to chart a way forward as he scrambles to save the peace process.

Just hours after the award, the government and FARC released a joint statement saying they would “continue listening” to opponents of the deal and discuss revising it.

Colombia’s former president Alvaro Uribe, who led opposition to the agreement, congratulated Santos, saying he hoped the award would encourage “changes” to the deal.

U.N. chief Ban Ki-moon said the prize came at “a critical moment” and proved Colombia had come “too far to turn back” from peace.

Nobel watchers had initially tipped both Santos and Jimenez as likely winners. Even former FARC hostage Ingrid Betancourt, who was held by the guerrillas for six years, said the rebel leader should have shared the prize. “Yes… it’s very hard for me to say yes… but I think so,” the former presidential candidate told France’s iTele.

But some experts said it was not surprising the committee had chosen to recognize only Santos. “A prize to FARC would have probably been poorly received by those who are skeptical about the peace agreement, and this therefore reduces the risk of the prize having a negative impact,” said Kristian Berg Harpviken, director of Oslo’s Peace Research Institute.

The Nobel committee has in the past honored former enemies for peace processes at fragile stages, including those in Northern Ireland and the Middle East.

The peace award is the fourth Nobel to be announced this week, with the economics prize to be announced on Monday, and the final prize, for literature, to be unveiled on Thursday.

The peace prize is a gold medal, a diploma and a cheque for eight million Swedish kronor, which will be presented at a ceremony in Oslo on Dec. 10.