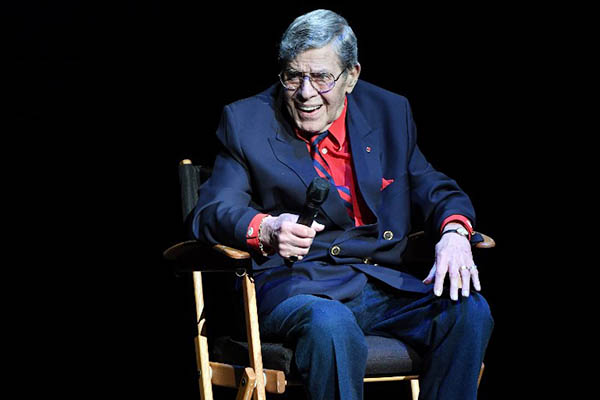 Among world’s biggest movie draws at height of his popularity, Hollywood comedian memorialized by fans, colleagues

Veteran Hollywood comedian Jerry Lewis, who died on Sunday aged 91, perfected a goofy brand of slapstick that endeared him to millions over the course of a career spanning six decades.

One of the most popular American entertainers of the 1950s and ‘60s, Lewis made his name as the clown behind such quirky comedies as The Nutty Professor but also won acclaim as a writer, actor and philanthropist.

The comedy legend, who at the peak of his popularity was among the world’s biggest movie draws, died at his home in Las Vegas early Sunday morning. “I can sadly confirm that today the world lost one of the most significant human beings,” said his publicist Nancy Kane. “Jerry died peacefully at home of natural causes surrounded by family and friends.”

Fans were leaving flowers at the comedian’s two stars on the Hollywood Walk of Fame. Hollywood’s iconic TCL Chinese Theater was to dim its lights on Sunday evening in honor of Lewis, who in 2014 sank his hands and feet into the cement squares in the theater’s forecourt.

Honored with accolades at home and abroad, including a Nobel Peace Prize nomination and France’s Legion of Honor, Lewis became known as much for his tireless efforts to promote awareness of Muscular Dystrophy as for his wacky comedy. Over the course of 45 years, he raised some 2.45 billion dollars for combatting the disease with an annual television event.

Born Joseph Levitch in Newark, New Jersey to two New York City entertainers, Lewis first took center stage at the tender age of five, when he performed “Brother, Can You Spare a Dime?” He began playing at resorts outside New York City that catered to Jewish patrons, known by touring entertainers as the Borscht Circuit. By age 15, he had assembled his own routine of lip-synching and made the rounds of New York talent agents, though to little avail.

At the age of 20, however, everything changed as Lewis embarked on arguably one of the most successful entertainment partnerships of all time with smooth crooner Dean Martin. The two fed off each other in now-classic comedy gags, including pratfalls, slapstick and lots of seltzer water, signing a long-term contract with Paramount Pictures.

“That fool was no dummy,” tweeted the comic star Jim Carrey, who cited Lewis as an inspiration. “Jerry Lewis was an undeniable genius an unfathomable blessing, comedy’s absolute! I am because he was!”

Some of the most notable films in Lewis’ extensive repertoire include It’s a Mad, Mad, Mad, Mad World (1959), The Geisha Boy (1958) and Funnybones (1984). His box office grosses, spanning nearly 50 years, total $800 million—an impressive figure since movie tickets cost no more than 50 cents during the height of his popularity.

After 17 films together, the Lewis-Martin partnership split in 1956, but Lewis continued his career in comedy and Hollywood. He won acclaim for his dramatic role alongside Robert De Niro Martin Scorsese’s 1983 film The King of Comedy.

“Be a hit. Score,” was his simple advice to young comedians, in comments once made to Larry King, the celebrity interviewer and a longtime friend. “Get the audience laughing and happy. That’s the secret.”

At other times he was more humble.

“Funny is fragile. It’s elusive,” he told the Los Angeles Times in 2010. “It’s elusive to everyone because you’re never going to get a handle on what’s funny.”

Fellow comedian Carol Burnett, who worked with Lewis several times, marveled at his physical gifts. “His voice could go up several octaves when he was supposed to be scared or insecure,” she told CNN. “Our audience was just dying with laughter, because he did such wonderful things with his body.”

Lewis’ long career was not without controversy, however. News reports over the years have criticized him as volatile and ill-tempered and he was accused more than once of berating fans attending his shows. In 2007, during the 18th hour of his telethon, the then-81-year-old actor used a homophobic slur in introducing one person off stage—later apologizing for “a bad choice of words.”

Eventually, he was dumped as host of the yearly telethon by the Muscular Dystrophy Association, ending a nearly half-century run amid a growing sense that he had overstayed his welcome.

In recent decades, Lewis had been plagued by health problems, and was declared clinically dead in 1982 after a heart attack. Ten years later he was diagnosed with prostate cancer and in 1997 found out he had diabetes. A diagnosis of spinal meningitis in 2000 further caused his health to deteriorate. But he was determined not to let ill health keep him from working as long as possible, including on a Broadway musical adaptation of The Nutty Professor as recently as 2011.