The Pakistan Movement had committed not to force state religion on minorities.

Non-Muslim Pakistani schoolchildren are being forced to observe Islamic rituals, writes physicist and educator Dr. A. H. Nayyar in the Aug. 13 edition of Dawn.

“The new school textbooks for the current academic year in all four provinces are in violation of Article 22(1) of the Constitution,” says Nayyar in his column. “This article states: ‘No person attending any educational institution shall be required to receive religious instructions, or take part in any religious ceremony, or attend religious worship, if such instruction, ceremony or worship relates to a religion other than his own.’” He says new General Knowledge textbooks for Classes 1 and 2 “require all children, Muslims and non-Muslims alike,” without exemption, to memorize Quranic verses and their translations, the names and timings and text of the daily prayers in Islam, and Islamic salutations. 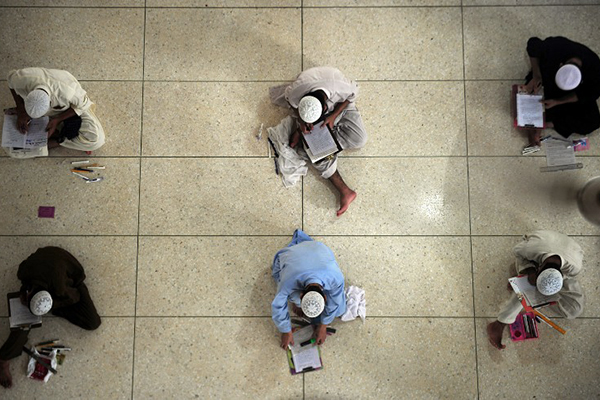 The Constitution contains a very old commitment to minorities which was first embodied in the Lahore Resolution of 1940. An interesting account of this resolution—which demanded separate state(s) for British India’s Muslims—is carried in M. Rafique Afzal’s A History of the All-India Muslim League 1906-1947 (Oxford University Press Pakistan, 2013).

This demand emanated from the consequences of the Wardha Scheme in education imposed by the Congress party in provinces controlled by it after the 1937 elections. The victory was heady: “Even Gandhi began to start his daily work, Jinnah once observed, by prayer and recital of the Bhagvat Gita and believed in ashrams and samities, ahimsa, spinning wheel, khaddar, Bande Matram, Sanskritized Hindi, Vidya Mandir and Wardha scheme.

“The Congress introduced the 36-line (29 lines in Sanskrit and seven in Bengali) song, “Bande Matram” (“Hail to the Motherland”), as the national song in the Hindu-majority provinces. This song had appeared in Bankim Chandra Chatterji’s novel Anandmath, which had clear anti-Muslim overtones and depicted a Hindu Sanyasi rebellion of a century earlier. The Bengali Hindus had used it as the national song in their movement against the partition of Bengal.

“After 1937, the provincial Congress assembly parties adopted it as the national song and used it to start proceedings of the legislative assemblies and other public functions outside the assemblies. Its singing was made compulsory in public schools. Muslims including the pro-Congress among them unanimously opposed the singing of this song. The Congress working committee did respond to their criticism and dropped all except the first two stanzas of the song.”

This was the first commitment of the Pakistan Movement: not to force state religion on the minorities. The second commitment was to the Biharis, who had been massacred during the communal riots in Bihar: “The brutality of the Bihar massacre in 1941 shocked everyone, and the conduct of the Congress ministry, according to Gandhi, was ‘shameful and disgraceful.’ Moved by the enormity of human and material loss, the Bihar provincial Muslim League called for an exchange of population between Bengal and Bihar, a demand that Jinnah endorsed to Pethick-Lawrence [secretary of state for India] and [British prime minister] Attlee.”

After Pakistan was disbanded in 1971, the Biharis who had migrated to contiguous East Pakistan in 1947 wished to be accepted by Pakistan as they did not wish to become Bangladeshi citizens after their persecution under linguistic nationalism. Given the above commitment of Jinnah, Pakistan should have accepted them but did not. This was the second commitment we forgot.

The 781-page volume on the history of the Muslim League is a definitive work by Afzal, who was principal research fellow at the National Institute (formerly Commission) of Historical and Cultural Research in Islamabad, and a professor of history at Quaid-e-Azam University. Afzal has also taught and worked at Columbia, the University of Massachusetts at Amherst, and the University of Jordan.

What’s the story behind the Bihari massacre?

Because this is a Muslim Country which came into existence on name of Islam.so every body have to follow our rules.