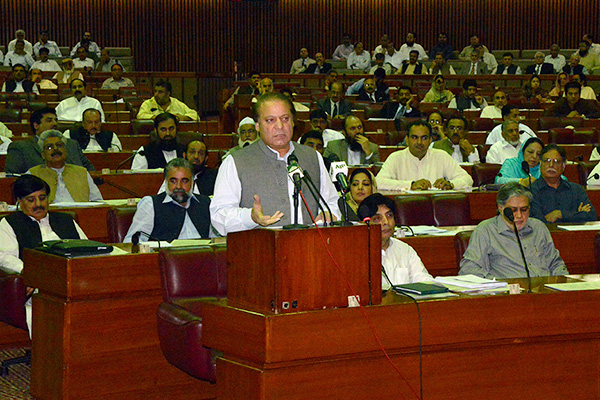 Pakistan’s National Assembly on Thursday moved a step closer to putting former president and Army chief Pervez Musharraf on trial for treason by appointing a committee to investigate him for subverting the Constitution.

Interior minister Chaudhry Nisar Ali Khan told Parliament that a four-member committee had been constituted to probe charges that Musharraf committed treason under Article 6 of the Constitution while in office from 1999-2008.

“This committee shall keep the Interior Ministry posted about the progress of the inquiry on a weekly basis and should submit its findings within a short space of time,” said Khan. The committee will be made up of officers from the Federal Investigation Agency, he added.

Musharraf, who returned from four years of self-imposed exile in March, has been under house arrest at his Islamabad home since April 19, when the Islamabad High Court remanded him to police custody for illegally detaining judges in 2007. His name has also been placed on the exit control list and he is barred from leaving the country. It was the first time the judiciary had ordered the arrest of a former Army chief.

Prime Minister Nawaz Sharif, who made a comeback in May by winning elections some 14 years after being deposed by Musharraf, said Monday that the ex-leader should be tried for treason. The offence carries the death penalty or life imprisonment. Musharraf faces a slew of other cases relating to his rule, including conspiracy to murder former prime minister Benazir Bhutto, who died in a gun-and-suicide attack in 2007.

The government on Thursday informed the Supreme Court of its intention to investigate Musharraf for treason. The apex court has been hearing a petition from lawyers demanding that Musharraf be tried for subverting the Constitution by imposing emergency rule and sacking judges in 2007.