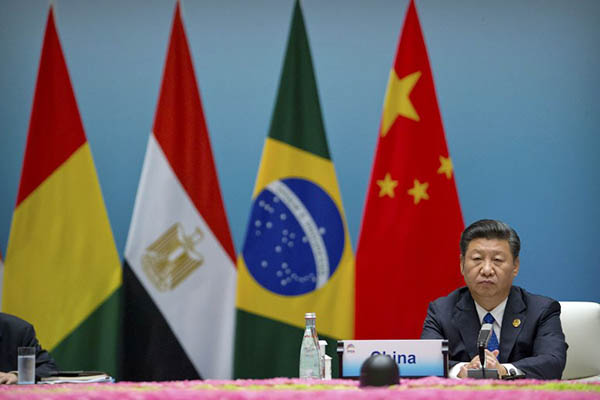 Chinese President Xi Jinping on Sunday acknowledged growing doubts over the relevance of the five-nation BRICS bloc of large emerging economies but called for the group to stick together even after China’s tense border row with fellow member India.

Xi will host the ninth annual BRICS summit on Monday in the southeastern Chinese city of Xiamen under the shadow of the border row and a North Korean hydrogen bomb blast. In a speech on Sunday in Xiamen, Xi alluded to questions hanging over the bloc, whose disparate members are preoccupied with political and economic problems at home.

BRICS—Brazil, Russia, India, China and South Africa—was formed to allow emerging economies that comprise more than 40 percent of humanity to present a united front in a world whose trade and finance rules were written by the West. But analysts say the bloc has made little progress toward that goal.

Lumping together far-flung and vastly different political and economic systems, BRICS has long been viewed by many as contrived, with few commonalities or significant achievements. “It’s really tough to see how BRICS is any type of coherent anything. What do they have in common?” said Christopher Balding, a Peking University economics professor. “Economically, trade-wise, financially, they all do things very differently.”

BRICS includes Communist-ruled China, authoritarian Russia and the democracies of India, Brazil and South Africa. While China is an economic powerhouse and India is rising, the Russian, Brazilian and South African economies have been hit hard by weak prices of export commodities.

China and India avoided a full-blown crisis when they backed away last week from a protracted standoff over a disputed Himalayan region—perhaps to avoid sullying the summit. But the encounter left a bitter aftertaste.

Foreign Minister Wang Yi pointedly said last week China hopes India will “learn lessons from this incident and prevent similar things from happening again.” In his speech on Sunday, Xi stressed the need for BRICS members to show mutual respect and “avoid conflicts” but otherwise did not mention the border dispute.

India and China also are divided over Beijing’s ally Pakistan, which Indian Prime Minister Narendra Modi—who will also attend the summit—has labeled a fount of terrorism.

Modi snubbed a separate summit called by Xi in May to promote the Chinese leader’s vision of reinvigorated ancient east-west trading routes, which is seen by many analysts as a Chinese geopolitical power play. Intra-BRICS trade is heavily tilted in China’s favor, fueling complaints from fellow members. India alone has lodged several trade cases against China this year.

Perhaps BRICS’ biggest success was the 2016 establishment of the Shanghai-based New Development Bank, envisioned as the developing world’s World Bank, but many economists doubt it will be influential. “BRICS envisioned quite a hopeful direction for the future but so far has had very limited influence on world politics and economics,” said Shi Yinhong, an international relations professor with Beijing’s Renmin University.

The summit is a chance for bilateral meetings including Xi-Putin talks on Sunday that could touch on other international concerns such as North Korea. It announced just before Xi’s speech that it had detonated a hydrogen bomb, an apparent major advance in its banned nuclear weapons program.