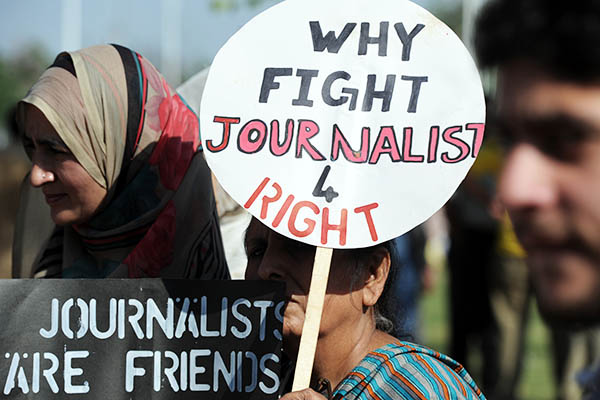 After the Hamid Mir attack, Pakistan’s media landscape in chaos.

The battle lines are drawn. The swords are out. The casualty in all this is complexity.

It started with the attack on anchor Hamid Mir and the allegation by his younger brother that the April 19 assassination attempt was the handiwork of the Inter-Services Intelligence agency. The allegation was hyped and played up by Geo News, the channel Mir works for.

The military has since struck back, filing an application against The Jang Group, parent organization of Geo News, before the Pakistan Electronic Media Regulatory Authority, starting a vilification campaign against the group in the real and virtual worlds through its proxies and not-so-covertly pressuring cable operators to either take the channel off their news bouquet or relegate it to an insignificant position. Reports also suggest that newspaper distributors have been asked not to deliver Jang and The News, the two newspapers published by the group.

As icing on the cake, suddenly “patriotic” Pakistanis have begun crawling out of the woodwork to petition the courts that the group should be banned for antinational content. There have also been regular demonstrations against the group from sundry elements, including some rightwing groups.

Then the bombshell: In a presser, Imran Khan of Pakistan Tehreek-e-Insaf hit out at both the federal government and Geo, accusing the news channel of being complicit in election rigging last year. He has since announced a protest rally at Islamabad’s D Chowk on May 11.

There’s more. As if on cue, the pied piper from Canada, Dr. Tahir-ul-Qadri, is suddenly back on local channels (especially ones that are leading the charge against rival Geo) and has also announced countrywide protests against the government. In a turn of events that would have done Marquez’s magical realism proud, Muttahida Qaumi Movement supremo Altaf Hussain has also decided to support Qadri.

In this ruckus, Mir is forgotten. We heard about the tribunal formed to investigate the attack on him. That tribunal is no more in the news. Nor is there indication of any further development in the case by the joint task force.

Here’s the problem with how this has unfolded. The attack on Mir may have been central to the war between Geo and the Army-ISI combine, but it does not take away from the fact that Mir was attacked and received multiple bullet wounds. He could have died. He is lucky to have survived. Moreover, while the First Information Report does not mention the ISI directly, Mir, in a subsequent interview to the BBC, did speak about there being an “ISI within the ISI.” By no stretch of the imagination can the words of a victim be brushed aside as anti-state and therefore of no worth. In fact, if we accept the argument that Mir is indeed working on an agenda, there is even more reason for a fair investigation to prove him to be such and clear the name of the ISI.

Sources in the military that this writer spoke with insist that Jang/Geo have staged all this, including the firing on Mir, to malign the military. The main plank of the ISI application and its case against Geo to PEMRA—routed through the defense ministry—is the verdict that the media group takes its funding and agenda from hostile external elements and must therefore be banned from operating in Pakistan. The May 6 hearing at PEMRA postponed the issue to May 9. Sources within Geo say that PEMRA has indicated that it has no option but to comply with the demands contained in the application.

If this is correct, then the argument by the military that it is only seeking a legal course of action falls flat. At the minimum, this would mean that the military is using legal cover to do what is already a foregone verdict. Military sources, however, deny the organization is pressuring PEMRA in any way. But they insist that Geo is deliberately transforming this into an issue of press freedom which it is not. According to them the issue is simple: Geo must respect the legal verdict and just like they insist on punishment for others’ wrongdoings, they should have the courage to face theirs.

This argument sounds fair enough except that the campaign to get Geo banned has spilled out of the regulatory confines of PEMRA and an unofficial, unspoken muzzling of the group has already begun, as noted above. It is this campaign which puts a question mark on a possible verdict by PEMRA to ban Geo and cancel its license. It would have been eminently more prudent if the military hadn’t put its proxies to work and tried to double-envelop the group. As matters stand, the off-PEMRA offensive has also begun to call into question any verdict by PEMRA which might go beyond fining the group.

It is at this stage that what could have passed as inappropriate journalism by the group begins to expand into the vastly more important issue of media freedom. The application to PEMRA itself goes beyond a complaint against Geo’s conduct prejudicial to responsible journalism and impugns motives, something which itself smells of a verdict. If Geo’s conduct was inappropriate (and it was) in that it began a campaign of accusation without any proof, the application against it more or less does the same. The application also contains “evidence” against the group starting with the Daniel Pearl incident.

The question is: why did the concerned authorities not move an application against the channel then—or subsequently through its many alleged transgressions?

Also, if the issue is as simple as Geo’s inappropriate conduct and must only be confined to that—a fair point—then why should there be a broader campaign against the group and an insistence that it must be put to the sword? Not just that, but who put Imran Khan up to the task of holding a presser against Geo?

Furthermore, if everything is taking a legal course, and must, why is there pressure—direct and indirect—on those in the media who are insisting on remaining fair and not taking sides? They are between a rock and the hard place because battle lines are about binaries and because most channels and newspapers have chosen to fall on the side they think will surely win.

Geo has, of course, been hoist by its own petard. The group’s business practices left much to be desired. It queered the competition pitch. It now complains of harassment of its staff. The fact is that a number of its reporters and anchors should have been disciplined for instigating rightwing groups against people who have stood up for a plural state and society. Since we are talking ironies, it is, for the most part, the very people these reporters and anchors maligned that have stood up for a fair treatment of the group.

But while Geo might be an extreme case of poor journalistic practices, its rivals are no angels either. It has been a race to the gutter and just like the Geo owners, who determine the agenda, other barons do the same. Even the issue of funding that is being raised against Geo is something which can be slapped on more than one rival channel currently sitting atop the moral Mount Olympus. If Geo is to be consigned to Hades, it should have company. Similarly, the patriotism of some individual anchors and writers would be very praiseworthy if it hadn’t emerged like a colorectal tumor.

Finally, if this episode is about Geo’s transgression and does not have a broader political game plan, as some indications suggest, then this is a good opportunity for PEMRA as well as other stakeholders to streamline a code for the media. Much good work has already been done in that direction and those proposals can be utilized.

This incident can either be used to muzzle the media’s freedom to inform and debate issues or it can be turned into an opportunity to take steps to reform the entire media landscape without encroaching on the necessary freedoms that are essential for the survival of a state and society.