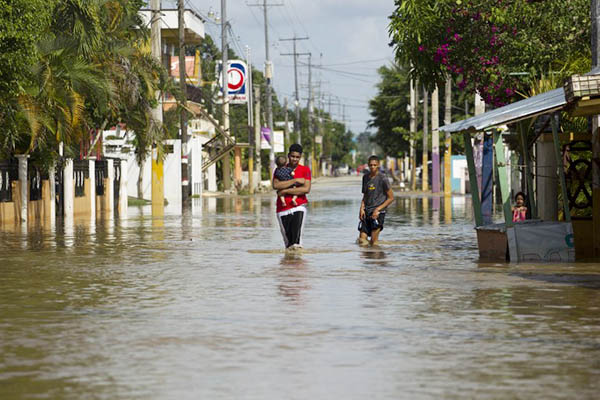 Living conditions in hurricane-ravaged Puerto Rico are growing worse by the day, with tired, bewildered people lining up to buy scarce fuel and food on Sunday amid a blackout and little to no telephone service.

Puerto Ricans are spending hours waiting in line to buy whatever they can, but often go home empty-handed if they do not manage a purchase before a dusk to dawn curfew takes effect. Cell phone service is spotty at best and hotels are also running out of diesel fuel for their generators.

The general manager of a Marriott hotel in the capital San Juan told guests that if they did not find diesel by Sunday night, the entire building would be evacuated.

Hurricane Maria slammed the U.S. island territory before dawn on Wednesday as a category-4 storm on the five-point Saffir-Simpson scale, as part of a vicious and deadly tear through the Caribbean.

The storm is blamed for 33 deaths, many of them on the tiny and poor island of Dominica and 13 in Puerto Rico. Authorities are also trying to evacuate people living downriver from a dam said to be in danger of collapsing because of flooding from the hurricane.

The 1920s era earthen dam on the Guajataca River in northwest Puerto Rico cracked on Friday, prompting the government to issue an order for mass evacuations in downstream towns. A Puerto Rican government official said the damage had sent water gushing through and prompted fears of flash flooding.

On Friday, public safety chief Hector Pesquera had cited a different cause for the initial dam failure, saying a drain that normally releases water from the dam in a controlled fashion had broken, sending it gushing out in torrents.

Puerto Rico was already battling dangerous floods elsewhere on the island because of Hurricane Maria, which Governor Ricardo Rossello has called the most devastating storm to hit the island in a century. In a 1500 GMT update, the U.S. National Hurricane Center said Maria had top winds of 169 kilometers per hour and was located about 475 miles south-southeast of Cape Hatteras, North Carolina.

Of the 13 victims in Puerto Rico, eight died in the northern town of Toa Baja, one of the worst-hit areas which was ravaged by winds of more than 125 miles per hour and then hit by flooding when the island’s largest river, La Plata, burst its banks.

Marina Montalbo, a 36-year-old secretary from Isabela, was trying to rest in a shelter with her husband and her 11-month-old baby. “They made us evacuate. It was a really difficult thing to have to do,” she said, sobbing. “We just had to get out; they were screaming that we had to get out.”

Across the island, streets were littered with debris from the storm, with toppled trees, street signs and power cables strewn everywhere. The torrential rain also turned some roads into muddy brown rivers, impassable to all but the largest of vehicles.

Puerto Rico’s electricity network has been crippled by the storm and engineers say it could take months for power to be fully restored.