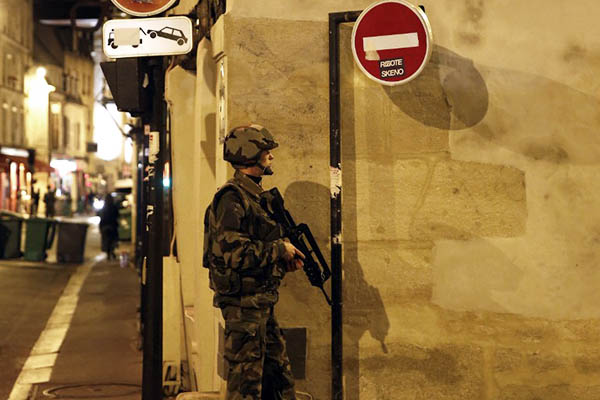 There is more than one party at fault for the brutal attacks in Paris.

In his preface to Frantz Fanon’s The Wretched of the Earth, Jean-Paul Sartre, writing of violence in Algeria, said: “Will we recover? Yes. For violence, like Achilles’ lance, can heal the wounds that it has inflicted.”

Sartre, of course, like Fanon, justified the reactive violence by Algerian nationalists even as he condemned the proactive violence and torture by the French police and paramilitary.

But the problem with the active-reactive violence spiral is that at some point the causation becomes blurry. Albert Camus, himself a French-Algerian, had a different take. He abhorred the violence by National Liberation Front against fellow Arabs and also other pro-independence groups such as the Algerian National Movement as much as he condemned the violently oppressive policies flowing from Paris. He did not consider the cycle had any healing power. Quite the contrary. He was right.

This is how Camus put it in his Algerian Chronicles: “If the intellectual does not join the combatants themselves, then his (admittedly less glorious) role must be simply to calm things down to the point where reason might again play its part.”

Yet, to do so is easier said than done. Conflicts, especially those based on ideologies and simmering over long periods, are about extremes. They aim for the collective good, howsoever one might define that good, and ignore the individual who, were he to refuse to identify with one or the other adversary will always find himself caught in the vortex of forces that are beyond his control.

Camus himself in his long essay, The Rebel, talks about rebellion thus: “…from the moment that the rebel finds his voice—even though he has nothing to say but no—he begins to consider things in particular… He acted under the lash of his master’s whip. Suddenly he turns and faces him. He chooses what is preferable to what is not. Not every value leads to rebellion, but every rebellion tacitly invokes a value…

“An awakening of conscience, no matter how confused it may be, develops from any act of rebellion and is represented by the sudden realization that something exists with which the rebel can identify himself—even if only for a moment… He proceeds to put self-respect above everything else and proclaims that it is preferable to life itself… the slave suddenly develops an attitude of All or Nothing. Knowledge is born and conscience awakened.”

In movements, that knowledge and conscience begin a chain reaction. The individual act becomes collective conscience, acquires a life and momentum of its own and, paradoxically, enslaves the individual. Put another way, in an adversarial relationship with the master, the individual conscience so vital to the act of rebellion wins adherents and seeks to put down any individual thinking that lies outside the accepted idea of that something which exists and for which people are prepared to die.

This is why Fanon’s wretched don’t just fight against the master but also the natives that seem to be collaborating with the master and all those who want to stand outside the conflict or want to take a balanced, reasonable position while the conflict, and with it the violence, around them escalates.

It is tragic to see people die. What has happened in Paris must be condemned. But equally, what’s happening elsewhere and which is the reason for what’s happened in Paris must be deplored. The vulnerable Parisians were not just killed by the gunmen who shot them. They have also fallen to the policies of their governments. Ditto for soft targets anywhere in the world. French President Francois Hollande has said that the Paris attacks were carried out by the self-styled Islamic State. Be that as it might, the perpetrator does not really matter. It’s the idea which does and it’s that understanding which is woefully missing from the states’ responses in this conflict.

The world is interconnected, not just for good deeds but also for reprisals. It is easy to take sides. It’s easier still to simply say they hate our values or they just hate us. Or, it is about religion. None of that will solve the problem. Sociological theories of conflict make it clear that religion, ethnicity, language or any of the other identity markers are never causes of conflict per se. There’s politics involved, now even geopolitics and socioeconomic factors. But the markers make it easy to win adherents, to other the other. That is where identity markers come in. They are not causes; they are motivating tools. It helps no one that western leaders mouth the they-hate-us mantra. That has only begotten more violence.

None of this is a justification for killing unsuspecting weekend revelers. But it’s important for any analysis, nonetheless. These attacks are to be seen at two levels: the politico-strategic level and the operational one. At the operational level, it makes eminent sense for the weaker adversary to gain asymmetric advantage over powerful states and introduce methods for generating violence at low cost to itself while increasing exponentially the cost for the states.

Take suicide bombing. A suicide bomber is the ultimate smart bomb. He doesn’t need an extrication plan. But most importantly, by willing to die for whatever cause—the issue here is not the rightness or wrongness of that cause—he upends the entire security paradigm which is grounded in self-preservation.

Military officers, managers of violence, know that fighting is all about gaining an asymmetric advantage. It is often said that if you find yourself in a fair fight, you didn’t plan your mission properly. That is the essence of winning and losing. It is also the essence of surprise. In a contest the adversaries seek to stay ahead of each other, innovating, thinking up new measures and countermeasures and so on.

But understanding the operational side is never enough, even as it is important in terms of an immediate response. The smart thing to do is to go to the causes. What would make someone kill and get killed. Why would someone, one day, like Camus’ rebel, up and say no. Why do men want to be treated equally? Or, to put the idea differently, why do Hegel’s self-consciousnesses get locked in mortal combat for self-recognition?

There’s a dominant narrative, adopted by the states, the free world led by the United States. But there’s also a resistance narrative, equally powerful in terms of motivating people, people who are powerless, politically and socioeconomically, but find the power to challenge states when they become combatants in a nonlinear war that has unfolded across the globe. The French should understand it well. Sartre, Camus, Foucault, Bataille et al were all French.

Last year, in June, I argued in this magazine that the world has entered an era of perpetual conflict. Immanuel Kant wrote about perpetual peace. The problem with today’s interconnected world is that there can be no perpetual peace for some while there are others constantly fighting and dying.