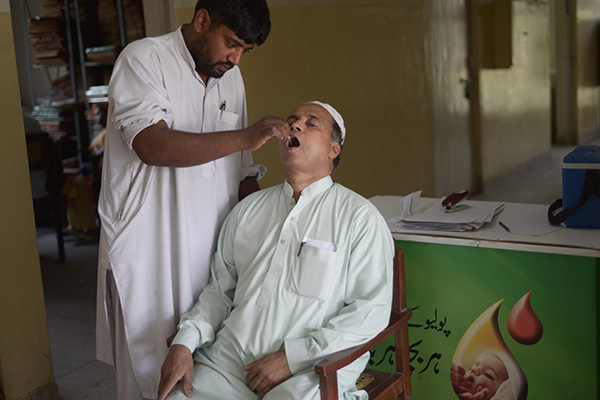 Hospitals and clinics are full of travelers seeking polio vaccinations before they travel abroad.

Pakistan, the world’s number-one exporter of polio, has seen a rush on vaccines and angry scenes at hospitals after new World Health Organization (WHO) guidelines aimed at halting the crippling disease caused widespread confusion.

The WHO declared a “public health emergency” at the start of May after new polio cases began surfacing and spreading across borders from countries including Pakistan.

The disease remains endemic in Pakistan, which is responsible for 80 percent of polio cases diagnosed around the world this year. The WHO advised Pakistani authorities to ensure all nationals and long-term residents planning to travel abroad were vaccinated.

But the government’s response has led to a rush on vaccines, confusion about certification and even angry scenes in hospitals. All this on the eve of the peak summer traveling season, when tens of thousands of Pakistanis go to see relatives or celebrate weddings in countries with large diaspora populations, such as Britain.

Observers say that since the WHO had been holding extensive discussions with the Government of Pakistan prior to the recommendations, authorities should have been better prepared for what was coming their way.

In a government pediatric clinic in Islamabad with walls decorated by posters of Minnie Mouse and Winnie the Pooh, an ugly scene breaks out as families line up to receive polio drops. Staff ask latecomers to return the next day, prompting some who are due to travel the same night to start hectoring the unit’s director—who gives them short shrift.

“It’s not our job to give you the polio vaccine, our job is to look after sick children who arrive at the hospital,” says the doctor, Tabish Hazir. “We are doing this only because of the confusion at this stage,” he says, still angry. “The government wasn’t ready, it hadn’t anticipated that the WHO would recommend restrictions. It arrived suddenly like a bomb.”

Pakistan has undertaken countless U.N.-backed campaigns in recent years to try to stamp out polio. But these efforts have been met with hostility in parts of the tribal areas, where Taliban warlords have banned vaccination as a Western spying plot. Militant opposition to vaccination has increased after Dr. Shakeel Afridi attempted to help the CIA track down Al Qaeda terror chief Osama bin Laden through a fake vaccine project. Vaccination teams have come under attack, with more than 50 health workers and police escorts killed in attacks in the past year and a half.

The U.S. this week pledged that its intelligence agencies would foreswear the tactic due to the fallout. On top of this, long-standing unfounded rumors about the vaccine causing infertility or containing pig products also persist. As a result, polio continues, mainly in the tribal areas along the Afghan border and in Karachi.

Polio traced back to Pakistan has been found in Afghanistan and Syria and the new campaign of vaccination is aimed not at eradicating the disease from Pakistan but at stopping its spread beyond its borders. The government has said that anyone who has been in Pakistan longer than four weeks must be vaccinated before going abroad, even if they have been inoculated in the past.

The WHO guidelines said travelers should ideally receive the vaccine between four weeks and 12 months before travel. It is a difficult task in a country where immunized children rarely receive certificates and rampant corruption means there is a risk unvaccinated people could simply bribe officials to get the paperwork.

Mahwish and Bilal Khan, a young couple in the capital, were forced to revaccinate their family and complained the government has been sending out contradictory messages. “People thought that they will get these drops at the airport as we exit the country, then we have been told to get it here [at hospital], then we heard it has to be four weeks before we travel, then there are these exceptions for emergencies, so yes it is confusing,” said Mahwish.

Even though polio mainly affects young children, the WHO has called on authorities to also immunize adults leaving the country. This is because adults can carry the virus without developing symptoms, said Keith Feldon, field coordinator of the WHO anti-polio campaign in Pakistan.

The public clinics selected by the government to vaccinate travelers are drowning in work, while private doctors are doing a brisk trade with diplomats, journalists and other expats. One interviewed by AFP said he had vaccinated more than 500 people in the space of a week, at $35 a time.

The government has now called on the Army to go with health workers in the tribal areas and vaccinate anyone trying to leave. For Pakistanis preparing to fly to the U.A.E, Canada and Britain, confusion lingers.