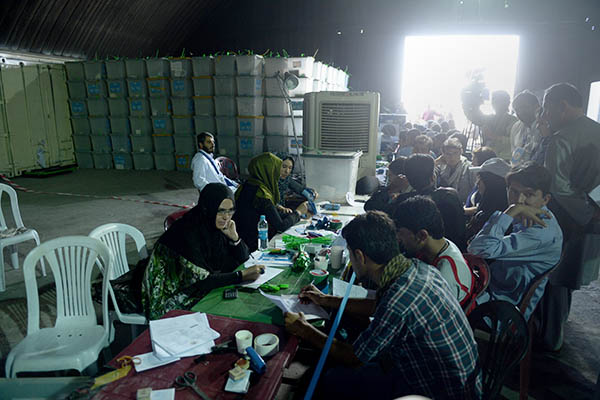 Hamid Karzai’s successor expected to be inaugurated into office by the end of August.

Afghanistan’s election audit needs to be fast and decisive to avert the threat of spiraling instability as U.S. troops pull out, but attempts to speed up the process are bogged down in squabbles and confusion.

Election officials are sorting through more than eight million votes in front of domestic observers, international monitors and representatives from the two presidential candidates. Every individual vote is physically examined and, if either campaign team complains, it is put to one side for further assessment.

In a sweltering warehouse in Kabul on Monday, a U.N. official peered at a row of disputed ballot papers from the eastern province of Paktika—a hotbed of alleged fraud on polling day more than seven weeks ago.

Both campaign teams had alleged that some papers showed suspiciously similar tick marks for their opponent, leading to a noisy four-hour dispute over one single ballot box. “We have a pattern here,” the adjudicating U.N. official said, pointing at some ticks. “But it is only three in a row, so it is ok. Now let’s look at the other side’s complaints.” By the end of the morning shift, disputes still raged over the box—just one of the nearly 23,000 being checked after Abdullah Abdullah rejected preliminary results that gave victory to his poll rival Ashraf Ghani.

“Arguments over ticks are among the main issues,” said Salim Paktin, a Ghani team representative. “Also, there are often more votes in a box than ID card numbers collected at the polling station, or sometimes no stamp on the back of the paper. If the two sides and the IEC [Independent Election Commission] official can’t agree, then we call in the U.N. technical experts.”

The audit was brokered by U.S. Secretary of State John Kerry as an emergency measure when Afghanistan appeared on the brink of serious unrest due to the contested outcome of the June 14 run-off vote. As tensions grew between Abdullah’s Tajik loyalists and Ghani’s Pashtun support base, the United Nations expressed alarm at the risk of a return to the ethnic divisions of the 1990s civil war.

The audit, which required every ballot box to be driven or flown to Kabul, bought valuable time. But it also started a new bout of arguments as Afghanistan struggles toward its first democratic transfer of power.

Abdullah’s team again boycotted the process on Sunday, and only returned after long negotiations led by U.N. head of mission Jan Kubis. “We are here now, back to check that the audit is fair,” said Basir Mohedi, a university physics student on duty as one of Abdullah’s volunteers at the election commission’s heavily-guarded headquarters. “We support the process, but want to make sure the rules mean that no fraud allowed is to remain.”

Only about 2,000 of the 23,000 ballot boxes had been audited by midday on Monday, and the next stage of invalidating fraudulent votes will not begin before next week—with many technicalities still unresolved. “To be honest, it is still a mess,” said one international observer who declined to give their name. “The rules for whether a box goes into the invalidation stage have been changing, and not all the officials appear to have read the new ones. One table can do five boxes in the same time that another table does none.”

With U.S.-led military operations against the Taliban winding down, it is seen as essential that a legitimate new government takes power soon if Afghanistan is to avoid worsening conflict and rapid economic decline. The delayed inauguration of President Hamid Karzai’s successor is now set for the end of this month, nearly five months after the first round of voting in April.

Surrounded by incomplete paperwork and un-audited ballot boxes, workers at the election commission are up against the odds to meet the new deadline. But the IEC is now operating shifts from 7 a.m. to 8 p.m., and its spokesman struck a determinedly upbeat note. “The auditing is going well,” said Noor Mohammad Noor. “We will finish as soon as possible and then announce the final result.”