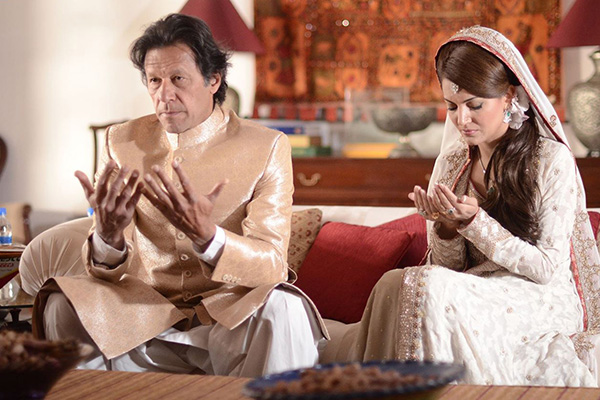 Last week, Pakistan Tehreek-e-Insaf chief Imran Khan, 62, and talk show host Reham Khan, 41, took time out from saving Pakistan to apparently tie the knot. This is the second marriage for both. Months ago, Imran had lightheartedly told his antigovernment sit-in in Islamabad that he wanted his goal, the ouster of Prime Minister Sharif, to happen soon, so he could remarry. Clearly, Imran couldn’t wait. Earlier last month, fresh and credible reports emerged that Khan and Khan had wed. But Imran delayed the announcement and the latest photo-op until he had obtained the blessings of his ex-wife, Jemima Khan, and their two sons. Not everyone seems happy about the match. Reham doesn’t compare favorably with Jemima, widely admired for her selflessness as a wife, ex-wife and mother. And Imran’s sisters, who didn’t attend the Islamabad photo-op, are reportedly keeping their distance from the new family member. This is hardly the happy new start Khan and Khan probably deserve.