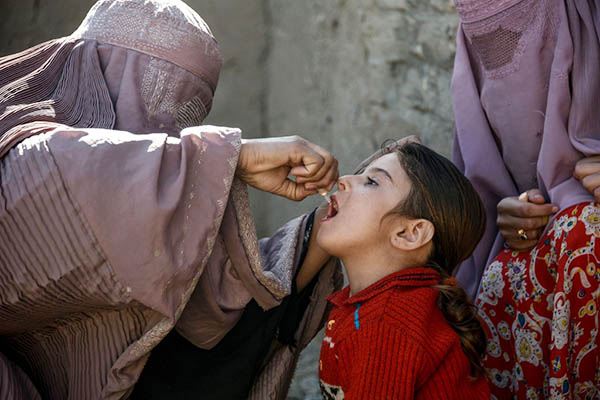 Two-year-old Farid should have been vaccinated against polio, but his family—like many in rural Afghanistan—believed the conspiracy theories and refused to have him inoculated. He contracted the virus, and now faces a crippling life sentence battling a potentially fatal disease with no cure.

“When the doctors told me he had polio, I felt remorse. I had believed people who told me the polio vaccine was a plot against Muslims,” Abdul Wali, the child’s uncle and head of the family, told AFP of his decision to rule against inoculation.

In the past decade, the numbers of people infected with polio declined from a high of 80 in 2011 to 13 in 2016. But last year there was a jump in new cases with 21 reported across the country.

Polio immunization is compulsory in Afghanistan, but distrust of vaccines is rife, and the programs are difficult to enforce particularly in rural regions. The Taliban, having previously restricted access to such programs for residents living in areas it controls, says it has instituted a total ban on inoculations.

Militants and religious leaders tell the community that vaccines are a Western conspiracy aiming to sterilize Muslim children, or that such programs are an elaborate cover for Western or Afghan government spies.

The CIA used a fake immunization campaign to help track down Al Qaeda leader Osama Bin Laden in Pakistan’s Abbottabad, where U.S. forces later killed him in 2011, which has fueled the conspiracy theories. Fears run so deep that some parents force their children to vomit after they receive the compulsory polio drops in government-run health centers.

“We see this a lot,” said Aziza Watanwal, a doctor in Kandahar city. “They believe in the propaganda.”

“Now she is paralyzed,” Mohammad said, as he looked at his daughter lying in a bed.

In the border region between Afghanistan and Pakistan, home largely to conservative tribal communities, claims that the polio vaccine contains impure particles—including blood from pigs, a taboo animal in Islam—are widely shared. “I have heard from elders and scholars here and in Pakistan that the polio vaccine is impure and those who receive it will grow up with a weak faith in Allah,” Kandahar city resident Abdul Wasay Rahimi told AFP.

All seven of Afghanistan’s polio cases so far this year have been in Taliban-controlled areas across the south, according to health officials.

Health experts view the door-to-door vaccination campaign as the best way to eradicate polio. But the tactic has fallen under a cloud of suspicion, in part because of the CIA ruse.

We tell residents the vaccination workers “are helping the vulnerable children. They are not spies,” Stanikzai said.

Taliban spokesman Zabihullah Mujahid said his organization believed polio vaccination workers use the programs as a ruse to gather intelligence in areas under insurgent control, then report this to foreign forces. “There are houses of [Taliban] officials, who are identified [during vaccination drives] and then these houses are hit by airstrikes from the invading forces,” Mujahid told AFP. He claimed the Taliban banned the polio vaccinations as a response to these concerns, claiming the move was to avoid foreign attacks and civilian casualties.

“We banned the vaccinations and until we are assured that such incidents do not repeat, we cannot allow them back,” Mujahid insisted.

The anti-vaccination phenomenon has spiraled worldwide as adherents peddle baseless claims that are amplified through social media, resulting in a resurgence of highly contagious diseases. In the U.S., measles cases have hit their highest levels in 25 years.

Aside from Afghanistan, polio is endemic in two other countries—Pakistan and Nigeria—although a relatively rare strain was also detected in Papua New Guinea last year.

More than one million Afghan children were deprived of polio vaccinations in 2018, said Stanikzai, who also oversees Afghanistan’s health ministry campaign for polio eradication. If the Taliban continue their ban, more than two million children would be deprived of the vaccination, he warned.

“Conspiracy theories can in particular flourish where people’s lives are strictly controlled by hardline militants,” Afghan sociologist and medical expert, Wahid Majroh said. “So, when these militants tell the people that vaccines are bad, it would be hard to convince them it is good,” he said.

Each year, his agency sets the goal of eradicating polio in Afghanistan. Rasekh said: “While it is quite possible, it feels frustrating to see at the end of the year that it didn’t happen because armed men think we are spies, and locals think vaccines are contaminated.”