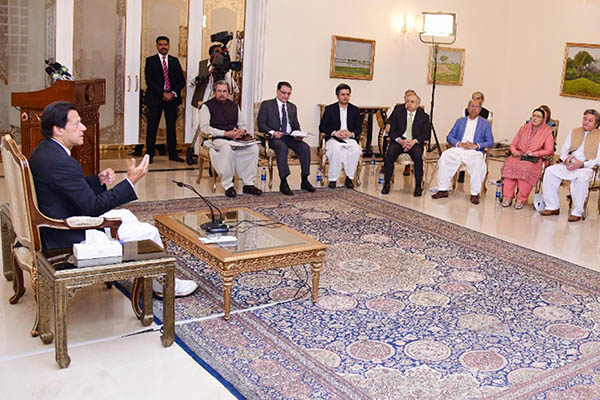 The Government of Pakistan will from April 14 end restrictions placed on the country’s construction sector—to curb the spread of the coronavirus—to enable laborers to earn livelihoods, Prime Minister Imran Khan announced on Friday.

During a media interaction on the prevailing situation in the country, Khan said the decision had been taken to revive economic activities in the country. He also announced various incentives to boost the construction sector, including tax incentives, waivers and subsidies.

According to Khan, anyone who invests in the construction sector in 2020 would not be questioned on the source of income. In addition, tax on land would be levied on the basis of per square yard and per foot.

The prime minister said anyone who invested in the Naya Pakistan Housing Program would be granted 90 percent tax rebate, adding withholding tax on cement and steel sectors had also been waived off. Overall sales tax in the construction sector would be brought down to 2 percent.

According to Khan, Capital Gains Tax on sale of houses was also being abolished. He said the government had decided to elevate the construction sector to an industry, and a Construction Industry Development Board would be established to help promote the construction industry in the country.

The prime minister said the government felt the construction sector was essential to providing jobs for laborers in urban settings, as agriculture was catering to needs in rural areas. “We cannot predict what the situation will be after two or four weeks,” he said, adding that no one should think the spread of COVID-19 was low due to “strong immunity.”

He said the situation regarding the lockdown would be reviewed on April 14 and further decisions taken at that stage.

Referring to the Ehsaas Emergency Cash Relief program, the prime minister said under it Rs. 150 billion would be distributed among the needy. About 10 million people have applied for financial assistance through the SMS service so far, he said, adding four million requests were already in process and payments would be disbursed to them within three or four days.

Reiterating his view that a countrywide lockdown could not be implemented in Pakistan, as it would result in hunger among the masses, he urged the entire nation to demonstrate responsibility in observing social distancing protocols to contain the spread the virus. “The nation will surely defeat the pandemic with unison and unity,” he added.

To a question, the prime minister said the objective of the Corona Relief Fund was to assist the needy and downtrodden segments of the society in this critical time. He said the government had already earmarked Rs. 150 billion for low-income groups in its Rs. 1,200 billion relief package, but that was still an insufficient amount.

Similarly, he said, the Tiger Force had been launched to provide feedback to the government about where there was most need for intervention. Over 400,000 people have registered for the volunteer force so far, he added.

Pakistan currently has 2,708 confirmed cases of the coronavirus, with 40 deaths and 130 full recoveries. There are concerns that the country is not testing enough, as National Institute of Health data shows that country has only administered some 30,000 tests since the outbreak last month.