Home Lightbox Controversies Have Made Me a Stronger Person: Wilshere

Controversies Have Made Me a Stronger Person: Wilshere 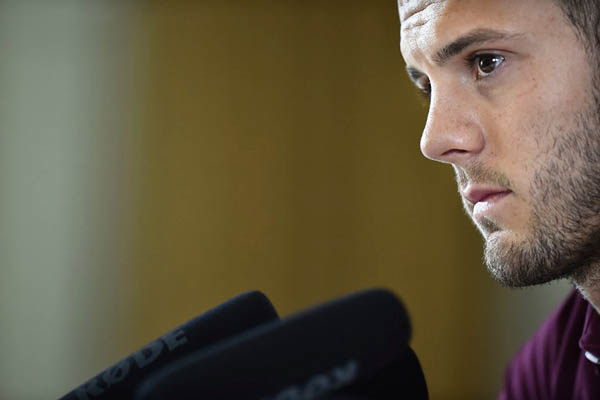 Arsenal midfielder says he will not change his playing style but admits he has made some mistakes over the years.

Arsenal midfielder Jack Wilshere cannot explain his tendency to generate unwanted headlines, but he believes the controversies that have pockmarked his career have made him a stronger and wiser person. An Arsenal and England regular—injuries permitting—since the age of 18, Wilshere has grown up beneath the glare of the flashbulbs and the light has rarely been forgiving.

He has twice had to apologize after being photographed smoking, while he is currently waiting to learn his fate after being charged with misconduct by the Football Association for leading Arsenal fans in abusive chants about arch rivals Tottenham Hotspur during their FA Cup victory parade.

“I was thrown into the scene at quite a young age, at 16, and by 18 I was playing for the national team, so naturally it was going to come,” he says of the attention that has accompanied him since his teenage years. “I do quite enjoy it, some parts more than others. I’ve made mistakes, been open about the mistakes, I’ve learnt from those mistakes and I feel I’ve grown up and I’ve done a lot of growing up from when I was 18. It’s been a long and sometimes difficult five years.”

Wilshere’s rap sheet also includes police warnings for a late-night fracas in 2010 and for spitting at a taxi driver while drunk in 2011, as well as a two-match ban for making an offensive gesture at Manchester City fans.

When invited to name the biggest regret of his career, Wilshere pauses and thinks for a couple of minutes before settling on the two smoking incidents, admitting: “I made the same mistake twice.”

Asked to explain why—paraphrasing Mario Balotelli’s famous goal celebration—it is always him, Wilshere replies: “I’m not sure why it’s always me, but I’m learning from it.”

His propensity for attracting controversy is surpassed only by his capacity for hurting himself, with a five-month mid-season lay-off due to ankle ligament damage the latest in a long line of injuries to have troubled him over the past five years. But although he often invites fouls by luring opponents towards him before either darting past them or releasing the ball at the last moment, he refuses to countenance changing his playing style.

“When I was injured, a few people said I should change my game, I should get it and pass it,” he told journalists at England’s team hotel in Watford, north of London, this week. “It did go through my head, I thought maybe they are right, maybe I should. But as soon as I came back and I got on the ball, I just wanted to run with it. There are things I can do—you look at the best dribblers in the world, [Lionel] Messi and [Andres] Iniesta, it seems to stick to their foot, so I can work on that when I am dribbling. But I am never going to change my game.”

He adds: “I’m focused on this last game [England’s Euro 2016 qualifier away to Slovenia on Sunday], then going away on holiday. I’m in a position where I don’t want the season to end because my fitness levels are still on the way up. I’ve only been back three months, so I’ll have to be sensible this summer.”

Wilshere’s upright running style and ability to drift past opposing players calls to mind former England midfielder Paul Gascoigne, whose career was equal parts genius, controversy and injury. While Wilshere cites Gascoigne, the subject of a new documentary film, as a footballing inspiration, he shies away from suggestions that his own career risks tumbling down a similar, sharply undulating path.

“It’s difficult for me to comment on that because I don’t know what he’s been through in his life,” said the 23-year-old. “I know one thing for sure, that he was one of the best ever English players. Similar to the way I like to play, he liked to pick up the ball and run with it. He’s someone who on the pitch I would definitely look up to.”