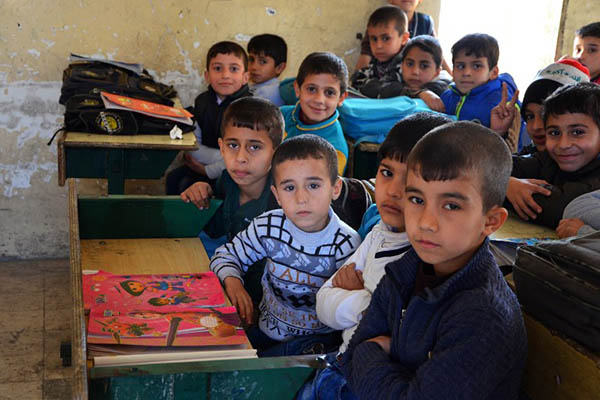 On a classroom whiteboard in the battered city of Mosul the words “rediscovering how to smile” outline the heartbreaking task of Iraqi teachers striving to heal their students’ mental scars after brutal Islamic State group rule.

Dozens of Iraqi teachers—many battling trauma themselves—have gathered at a university, where instructor Nazem Shaker seeks to guide them in helping children still struggling to cope months after I.S. was driven from the devastated city.

Shaker has drawn a “problem tree” on the board whose roots are a litany of anguish: “relatives killed”, “witnessing beheadings”, “destruction” and “poverty.” He hopes that through a program of games, mime and sport, teachers will be better able to help students reach the goals outlined in the top branches of his diagram, where “hope” and “optimism” join the aspiration to smile again.

“How to live together and eradicate violence,” he says are key lessons that have to be passed on. The teachers must help show students how to reconstruct their lives and escape the stress, pressures and bad memories that haunt them, he adds.

It is not just the years of I.S. rule that haunt the waking lives and sleeping hours of the children in Iraq’s second city. The ferocious nine months of urban combat that saw Iraqi troops force out the jihadists in July with the help of airstrikes by a U.S.-led coalition have left deep marks—both physical and mental.

School headmaster Noamat Sultan encounters the destructive impact of the psychological trauma daily. “One of our students was very aggressive and kept on picking fights with his classmates,” he tells AFP. “We had a long discussion with him and discovered that his father and brother had been killed recently in an explosion.”

With the help of the boy’s older brother and more attention from teachers, he has gradually been coaxed back to himself. “We have already managed to convince him not to drop out of school,” said father-of-eight Sultan.

Physical education teacher Rasha Ryadh has seen the heavy toll from the “psychological pressures caused by seeing executions, deaths, explosions and the loss of loved ones,” but is sure the students can recover. “They are ready to respond positively to the rehabilitation programs because they want to banish the thoughts and memories that drag them back to the period of Islamic State group rule,” she says.

Such is the case for 12-year-old schoolboy Ahmed Mahmud, who despite his youth says he is “exhausted” by everything he has seen. “When I sit down in class I don’t have the will to study,” Mahmud says. “I think back to the time of I.S. and I remember those who were executed like my uncle. They threw people off buildings and forced us to watch.”

The 900 students at head teacher Sultan’s school are able to study in just half of the building after fighting reduced the rest to rubble. The few remaining classrooms are seriously overcrowded, and benches meant for two pupils often have five or more crammed on them.

Twelve-year-old Osama is not yet among them. He is still reeling from seeing an airstrike send most of the other houses in his street crashing down on top of his neighbors. “For weeks he didn’t say a word,” says his mother Umm Osama.

The boy still needs help to dress, wash and eat, and often seems lost inside himself. “Sometimes without warning he’d leave the house and just wander around aimlessly for hours,” his mother says. “Several times it was hard to find him.”