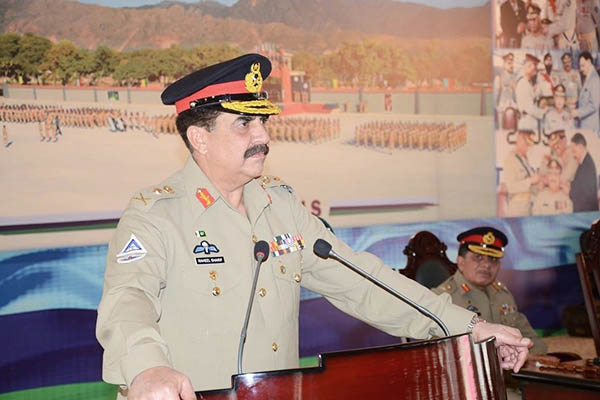 The Army chief said what was right.

Media opinion was intensely focused on the terror-corruption binary posited by Army chief Gen. Raheel Sharif when he spoke at the Signals Regimental Center in Kohat on Tuesday. He said, “The ongoing war against terrorism and extremism … cannot bring enduring peace and stability unless the menace of corruption is uprooted,” and added, “The Armed Forces will fully support every meaningful effort in that direction, which would ensure a better future for our next generations.”

Since terrorism was mentioned first, it would have been logical to assume that after terrorism weakens the writ of the state, and state institutions start taking orders from outlaws, corruption follows. The Rangers’ experience in Karachi has amply proved the point: the dominant political parties joined hands with the criminal gangs of the megacity and pocketed extractions that they couldn’t have with a normally functioning government. State functionaries took to graft and the politicians raked in big sums that they were forced by fear of future accountability to stash abroad in the shape of property. But the trigger was terrorism that disarmed the state institutions: it was the cause of corruption, not its result.

But the other argument of corruption-as-cause becomes relevant if you take into account the context of the current happenings in Pakistan. The biggest news for the past week has been the Panama Papers fallout on Pakistan, particularly on Prime Minister Nawaz Sharif and his family, who are trying to clear themselves of the charge of money laundering. Being aware of the “leaking” of national wealth abroad, and informed by the ridiculously small amounts paid by well-heeled politicians as income tax, public opinion veered to the need for tough accountability. Prime Minister Sharif was assumed to be guilty before even the true nature of his crime had been determined.

Corruption springs as a corollary of authority without accountability. Most Third World states are wracked by high levels of corruption because the politicians and bureaucracy function without proper scrutiny of their offices. There are many ways in which authority can dodge accountability, lack of properly empowered watchdog institutions and breakdown of law and order through war, or of writ of the state through terrorism, being two major causes. The general said what was right, given the task he has been asked to carry out.