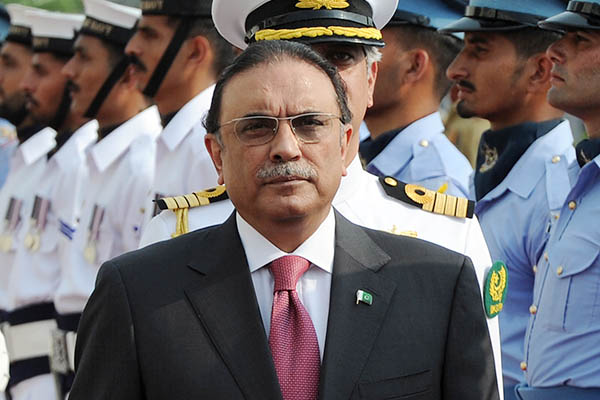 Former president has been directed to appear before accountability court on Oct. 29.

The allegations against Zardari relate to kickbacks, money laundering and the illegal construction of a polo ground at the prime minister’s official residence during his slain wife Benazir Bhutto’s two stints as premier.

As president Zardari enjoyed immunity from prosecution, but this ended when he stepped down after five years in September and now an anti-corruption court has taken up the cases.

“The accountability court has ordered former president Asif Ali Zardari to appear before the court on Oct. 29,” said a court official. The probe includes corruption allegations relating to customs contracts given to two Swiss companies that were behind a long-running tussle between the Supreme Court and the last government, led by Zardari’s Pakistan Peoples Party (PPP).

For more than two years PPP ministers refused to write to the Swiss to ask them to reopen their probe into claims Zardari and Bhutto laundered $12 million worth of bribes.

In June Swiss prosecutors refused to reopen the cases, saying no new evidence had emerged since they were dropped in 2008 and in any event the statute of limitations had expired.

How will the accountability court make Zardari appeared in the box?? This must be a joke of the century!!!

these are the old cases the question arises when Mr. Zardari was in the jail durin the regime of Nawaz Sharif when tese myties unvieled by SaifurRehaman fomer acoountability chief and later after the dismissal of Benazir’s govt. in 1996 and till Asif Ali Zardari in jail by Farooq Laghari the then president why these cases not decided prolonged only for the political interests and blackmailing purpose was seen and why now reopened ?