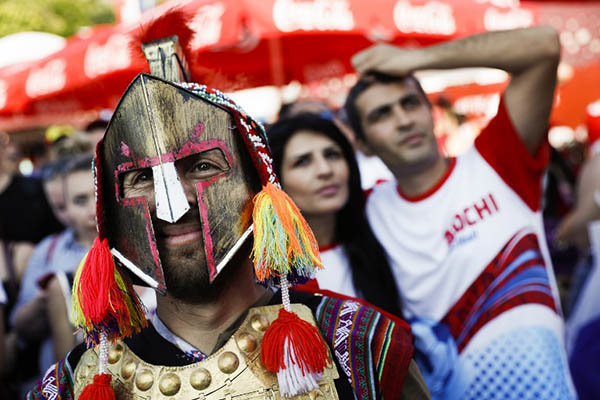 The chance to see the likes of Lionel Messi or Neymar in the flesh as well as take in the sights of Russia has seen tens of thousands of Latin American fans ignore distance and cost to flock to the 11 World Cup host cities.

The supporters of Argentina, Brazil, Colombia, Costa Rica, Mexico, Panama, Peru and Uruguay have with their facepaint and dance moves injected a rumbustious note to the 2018 finals in cities from Moscow to Yekaterinburg.

Following your favorite team thousands of kilometers from home does not come cheap—packages comprising travel, accommodation and three or more match tickets sold for between $8,000 and more than $30,000, according to travel agencies.

Some diehards who did not manage to get match tickets have still come along for the ride to drink in the atmosphere, watching games on giant screens at so-called fanzones. Although their team crashed out after two scoreless defeats, some 45,000 Peru fans made the journey of a lifetime—around half from the motherland, the remainder from around Europe, according to the country’s transport ministry—as their country made a first World Cup appearance in 36 years.

“Peru qualified and people went mad. They went right out and bought their flights—more than for Christmas and Mother’s Day combined,” says Ines Christing from the Despegar.com travel firm.

Some 54,000 Argentina fans who have bought tickets for matches, according to FIFA figures, have had a nail-biting time. Despite having Barcelona superstar Leo Messi on board, the Albiceleste were left facing a must-win game on Tuesday to stay in the tournament after a draw and a shock defeat in their opening two matches.

Gabriel Bianchi of the Buenos Aires-based Bibam Group said some fans have made their own way while others—mainly corporate clients—have opted for an all-inclusive package.

Bianchi said some opted to chase some “good deals [taking off] from Asuncion in Paraguay” at around $700 with trips from Buenos Aires often costing around three times as much. The most popular deal from Argentina was a five-night package including flights and hotel plus a ticket to one game for around $8,400.

Those with even deeper pockets could go the whole hog and spend nearer $13,000 for three tickets and 14 nights in a hotel.

Around 12,000 Colombia fans—often in family groups—made it to support the Cafeteros (Coffee Makers), led by stars James Rodriguez and Radamel Falcao, shelling out some $5,300 each according to Aviatur tour operator.

Mexican supporters who paid out some $13,500 for an all-inclusive package of five nights hotel and two match tickets got an early boost with their shock win over Germany. Some upgrade packages including three pool matches and a second-round game plus 15 nights accommodation required shelling out a thumping $30,400.

Some 16,000 Mexican fans registered with the FAN ID scheme, obviating the need for a visa to enter Russia. And 25,000 latino residents are thought to have applied from the United States—mainly, but not all, those with Mexican roots.

A more convoluted route option was chosen by five friends who are traveling around Russia in their own colorful bus painted with images of mariachis and other Mexican icons. The five made it by boat to the port of Bremerhaven, in Germany, from where they continued by road to Germany, where they received a welcome worthy of stars.