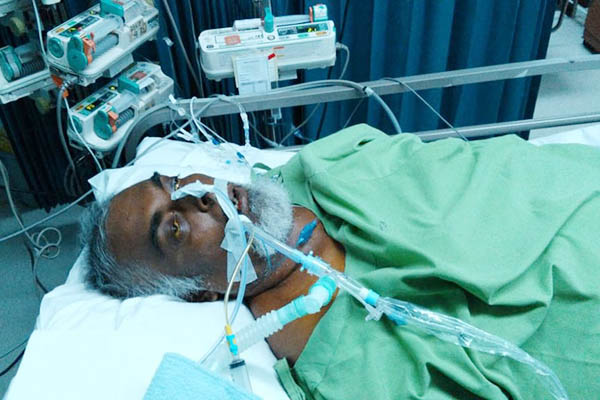 With hours left to live, the time to free Zulfiqar Ali is running out

Zulfiqar Ali, a Pakistani national on death row in Indonesia, has been transferred to the Intensive Care Unit, with hours left to live, according to a non-governmental organization.

Diagnosed with stage-4 liver cancer—in addition to chronic liver cirrhosis and diabetes mellitus—Ali was detained for nearly 14 years following a wrongful conviction, and now risks dying while in prison despite evidence of his innocence.

The 52-year-old father of five was arrested from Indonesia’s West Java province without warrant in 2004 on drug related charges. According to the Justice Project Pakistan, he was taken into custody because his flat-mate at the time was caught with 300 grams of heroine in Jakarta—a city he was not even in at the time of the incident. “For three days, Zulfiqar was kicked, punched and threatened with death by police until he was forced to sign a self-incriminating ‘confession,’” says JPP. “He was brutalized for days to obtain the only piece of evidence against him: a self-incriminating torture-induced confession. The police have never been able to find any material proof of his involvement.”

Following the days of torture and abuse, Zulfiqar has required multiple kidney and stomach surgeries, which may have contributed to his cancer diagnosis, suggests JPP, adding that he was not provided a lawyer for a month after his arrest or provided with consular access despite not speaking the language of his captors. The illegality of his arrest has been acknowledged by Indonesia, says JPP, and a 2010 inquiry found him innocent of all charges. Despite this, he continues to languish on death row and is yet to be acquitted.

JPP, a human rights organization that provides pro-bono legal representation for Pakistani prisoners at home and abroad, took up his case in 2016. As a result of its nationwide campaign, Indonesia halted his execution but has refused to let him go. Earlier this year, when Indonesian President Joko Widodo visitied Pakistan, ousted foreign minister Khawaja Asif tweeted that Prime Minister Shahid Khaqan Abbasi would “take up the matter of Pakistani prisoner in Indonesia with visiting Dignitary… requesting for repatriation in view of terminal illness of the prisoner.” At the time, Widodo, at Abbasi’s urging, promised that Ali would be granted clemency on humanitarian grounds. This has yet to happen.

“The Government of Pakistan owes it to Zulfiqar to bring him home, especially after the Indonesian President promised us his safe home. Now he is in the ICU with only a few hours to live. We cannot save his life but we can remove his wrongful conviction so he can die a free man,” says JPP Executive Director Sarah Belal. “A promise is a promise.”

Editor’s Note: Shortly after this story was published, Zulfiqar Ali passed away while still a prisoner in Indonesia. The promise to secure his freedom was never fulfilled.