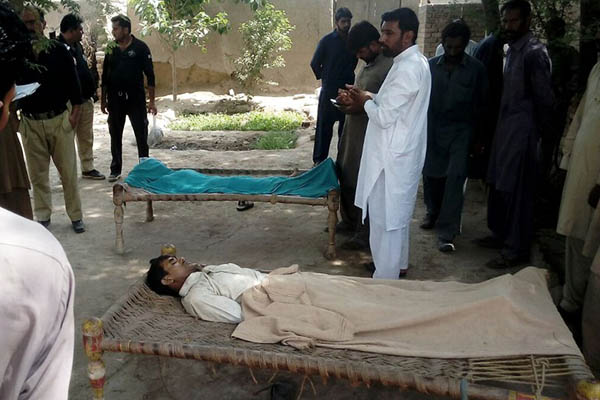 Mother of three and her alleged paramour murdered in Punjab province in apparent ‘honor killing.’

A mother-of-three and the man she was allegedly having an affair with were hanged from a tree on Thursday, with her husband, brother and father confessing to carrying out the killings.

The grisly murders occurred in the village of Chak 56, around 55 kilometers northeast of Multan. Hundreds of so-called “honor killings,” in which the victim, normally a woman, is killed by a male relative or relatives for bringing shame to the family are carried out in Pakistan every year.

“A woman and her alleged boyfriend were hanged to death by the woman’s father, brother and husband after the woman was caught on a date with her boyfriend in the backyard of her house,” said Sardar Afzal Dogar, chief of the local police station. The victims were named as Khalida Bibi, in her late twenties, and Mukhtiar Muhammad, who was around 19.

Dogar said all three suspected murderers were arrested and had confessed to their crimes, adding the woman’s husband had brought the alleged affair to the attention of the others.

Other local officials at the police station confirmed the incident. “They were beaten up before being strung up in the tree and hanged,” another official said.

Pakistan’s law minister in July announced that bills aimed at tackling “honor killings” and boosting rape convictions would soon be voted on by Parliament, following a slew of high profile cases including the killing of racy social media starlet Qandeel Baloch by her brother. A young British-Pakistani woman, Samia Shahid, was also murdered in July, with her husband blaming her family for orchestrating the killing.

The perpetrators of honor killings often walk free because they can seek forgiveness for the crime from another family member. The new law, which aims to do away with the clemency option, has not been made available to the public and no firm date has been set on when it will be tabled.

Observers say the government is fearful of blowback from the religious right who believe being able to forgive a murder in exchange for blood money is an essential component of Islamic law.