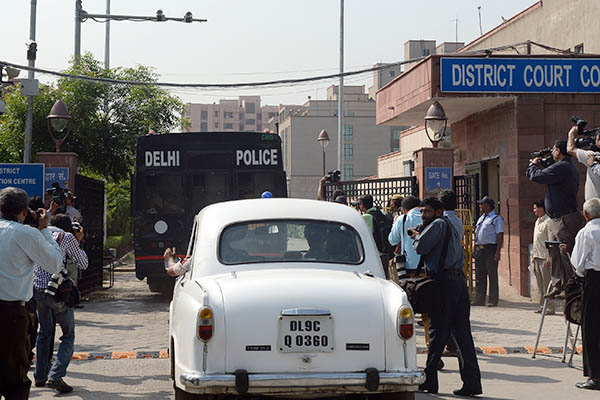 An Indian court convicted four men on Thursday of the gang-rape and murder of a physiotherapy student on board a moving bus in a crime that sickened the nation.

Judge Yogesh Khanna said the men, who could now face the death penalty, were guilty of murdering a “helpless victim” as he announced that arguments for sentencing of the four would be held on Wednesday. “I convict all of the accused,” Khanna said. “They have been found guilty of gang-rape, unnatural offences, destruction of evidence … and for committing the murder of the helpless victim.”

The four—Mukesh Singh, Akshay Thakur, Pawan Gupta, and Vinay Sharma—had all pleaded not guilty to the charges, which included murder, gang-rape, and theft.

The victim’s parents, who wept in court as the verdict was announced, have led the calls for them to be hanged, saying that they could only have closure once the four were executed. Their 23-year-old daughter, who cannot be named for legal reasons but has been dubbed Nirbhaya (or the “fearless one”) by the media, died of her injuries on Dec. 29 in a Singapore hospital.

Amid emotional scenes outside the courtroom, the lawyer of Mukesh Singh said that his client would launch an immediate appeal. “My client was simply driving the bus. He confessed fairly that he was driving the bus but he did not know what went on inside,” V. K. Anand told reporters. “We will appeal this verdict in the High Court in a month’s time. But we will see what happens tomorrow after arguments and the quantum of punishment.”

Mukesh Singh’s mother, draped in a beige saree, fell to Anand’s feet and broke down in tears outside the courtroom. The lawyer and her husband both tried to pick her up.

A. P. Singh, the lawyer for Akshay Thakur and Vinay Sharma, said both his clients would also appeal. “We will now go to the High Court with our appeal … This is a political conviction,” he told a scrum of reporters.

Any subsequent appeal by the defendants is likely to take years in India’s notoriously slow legal system. A juvenile has already been sentenced to three years in a correctional facility, while a fifth adult defendant, bus driver Ram Singh, was found hanging in his prison cell in March while awaiting trial.

“We will not accept anything below the death penalty,” said the victim’s father from his home in southwestern Delhi in an interview last week. “If all four are sentenced to death, I can’t imagine anything being better than that … We will get closure.”

The seven-month trial has been held in a special fast-track court in south Delhi, with more than 100 witnesses called to give evidence, including 85 for the prosecution. Despite an initial gag order on the trial, the case has drawn huge interest and about 20 TV trucks were outside the court on Tuesday morning while dozens of journalists queued to get inside.

During the trial, the prosecution produced DNA evidence, the victim’s dying testimony, and statements from a male companion who was beaten up during the attack. The victim and her companion had spent the evening watching a movie at a mall in south Delhi when they were picked up by one of the many private buses plying the streets. But rather than take them home, the group subjected the pair to a horrifying 45-minute ordeal that ended with both of them thrown out of the bus, virtually unconscious and naked.

In an interview ahead of the verdict, the 28-year-old companion said that the assault was beyond a nightmare. “I never imagined that one human being could treat another so badly,” he said.

The student’s family was bitterly disappointed with the three-year sentence handed down last month to the youngest defendant, the maximum allowed by law as he was only 17 at the time of the attack. India has the death sentence for the “rarest of rare crimes,” but often does not carry out executions.

The attack sparked weeks of sometimes violent street protests across India with seething public anger about sex crimes against women. It also led to tougher laws for sex offenders, including the death penalty for rapists whose victims die or are left in a vegetative state. But savage attacks against women are still reported daily in India’s newspapers and the gang-rape of a photographer last month near an upmarket area of Mumbai rekindled public disgust.