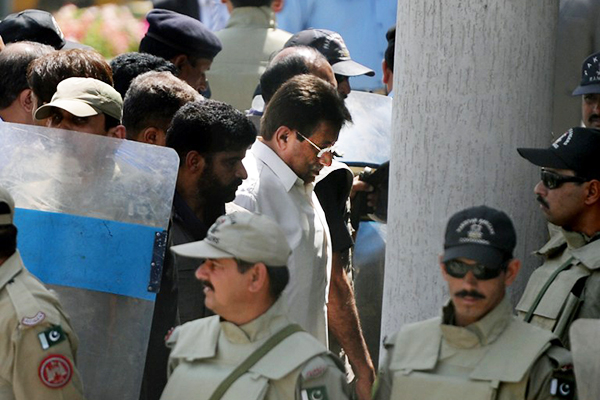 Former president likely to be detained at his Islamabad house, expected to be declared a ‘sub-jail.’

In another devastating blow for former president and Army chief Pervez Musharraf, the Islamabad High Court canceled his bail this morning and ordered his arrest. His lawyers say the former general will appeal the decision with the Supreme Court today.

Musharraf appeared in court this morning to address charges that he illegally sacked and arrested some 60 judges, including Pakistan’s chief justice, when he imposed a state of emergency on Nov. 3, 2007. After the court canceled the bail it had granted him six days earlier and ordered his arrest, Musharraf was whisked off the premises by official security personnel deployed with him in view of assassination threats from Al Qaeda and the Taliban.

The ex-general was not arrested in court—which would have been unusual in any case, according to former Supreme Court justice Saeed-uz-Zaman Siddiqui—leading anchors and talking heads on cable news channels to dub him a “fugitive” and “absconder.”

Musharraf’s 2007 emergency had also shut down the country’s privately-owned cable channels, causing them heavy losses. After news of his arrest warrant, several aired demands the caretaker federal government haul him up immediately, and urged the current Army chief, Gen. Ashfaq Kayani, not to impede his former boss’s incarceration.

Muhammad Amjad, a spokesman for Musharraf’s embryonic All Pakistan Muslim League party, expressed shock at the court’s decision. “We were quite sure the judge would extend bail,” he said. “It came as a surprise when the judge dismissed bail and said he should be arrested.”

“I have a conviction in my heart that I have not done anything wrong,” Musharraf said on Monday. “The only thing in my heart was to save Pakistan, and now that I am here I have the same commitment, that I will save Pakistan.”

It’s been a bad week for the once popular leader.

Yesterday, the Lahore High Court’s Rawalpindi bench extended Musharraf’s bail in a case accusing him of involvement in the assassination of Benazir Bhutto, the former prime minister killed in a gun-and-bomb attack on Dec. 27, 2007.

That court appearance wasn’t smooth either. At one point, a judge rebuked Musharraf and demanded he speak of Chief Justice Iftikhar Chaudhry—a man he removed from office twice, leading to protests that ultimately defeated his allied party in the 2008 elections—with “respect.” Musharraf reportedly apologized. As he left court on Wednesday, a clutch of his supporters clashed with angry, boisterous lawyers allied with the chief justice.

On Tuesday, a day after he unveiled his party’s election manifesto, election officials reversed their earlier decision and vetoed Musharraf’s run for the National Assembly in the upcoming May 11 elections from Chitral. Earlier, Musharraf’s papers had been rejected as a candidate from three other cities: Karachi, Kasur, and Islamabad.

“The selection bias and unwarranted activism shown by the Election Tribunal in rejecting my nominations papers from all four constituencies is not going to deter my resolve to help Save Pakistan,” he posted on Facebook. “I will challenge these decisions in the Higher Courts.”

He won’t find much joy there. Musharraf is facing a host of lawsuits, including one at the Supreme Court that could result in a death sentence.

A two-member bench said yesterday that Musharraf appears to be guilty of abrogating the Constitution and that the federal government should initiate treason proceedings against him. The attorney-general, Irfan Qadir, told the court doing so would exceed the single-point mandate of the interim government: to ensure free and fair elections. The judges weren’t pleased. Hours later, the interim information minister, Arif Nizami, said his government would in fact follow all Supreme Court instructions, including for Musharraf’s detention and trial, without hesitation.

Musharraf returned from four years of self-imposed exile on March 24 to lead his struggling party in the national and provincial elections. He returned to Pakistan despite threats from extremists, the judges, media, and political parties like the Pakistan Muslim League (Nawaz), whose government he ousted in October 1999. Days after his arrival back home, the courts ordered he be barred from leaving the country again.

It is likely that Musharraf’s house in Islamabad will be declared a sub-jail. The man who vowed to save Pakistan must now save himself.