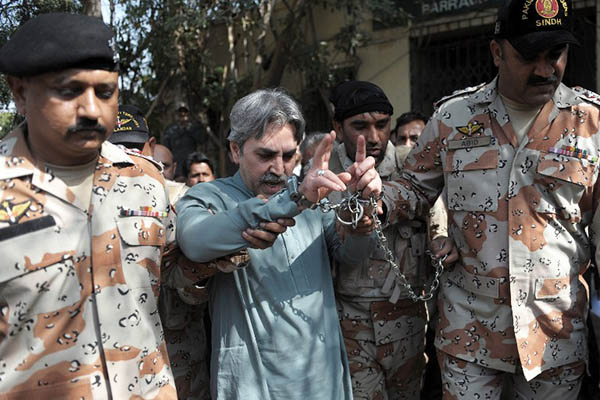 Anti-terrorism court allows Rangers 90 days custody of the men to investigate weapons charges against them.

An Anti-terrorism court in Karachi remanded 28 members of the Muttahida Qaumi Movement in Rangers custody on Thursday, a day after they were arrested during a raid on the party’s headquarters.

The Sindh Rangers on Wednesday raided Nine-Zero, the office of the MQM, seizing a “huge quantity” of weapons and arresting activists, including one convicted in absentia of murdering a journalist.

The 28 accused were brought blindfolded and handcuffed to the court Thursday amidst a large contingent of police and paramilitary Rangers.

Amir Khan, a senior leader, waved a V-for-victory sign as he was jostled on his way out from the court. Judge Khalida Yasmeen granted the Rangers 90 days custody of the men in order to investigate the weapons charges against them, a court official said.

Under the conventional criminal laws courts are allowed to hold suspects for a week, but this period increases to 90 days under the recently passed Pakistan Protection Ordinance (PPO), which deals with terror cases.