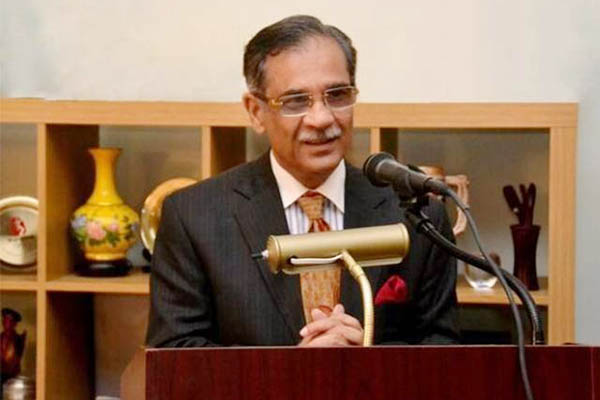 It is somewhat disconcerting to scour social and mainstream media and find that a sizable number of commentators are not particularly taken in by the reformist spirit that has taken hold of the Chief Justice of Pakistan, especially since his ‘Baba Rehmat’ speech.

To be precise, that speech did come as a surprise because until then not many, even in the jurist community, had known the CJP to sail into the rough waters of policy with such gusto. But sail he did and has picked up wind and there’s nothing, I am told, like the thrill of heeling over as the sails fill and you pick up speed.

He has another year left and, Odysseus-like, he has bade adieux to his family in order to do what he is destined to do: use the opportunity to do as much good as he can, detractors be damned. From healthcare to organic foods to easement rights to observing any and everything and passing orders, he is a man possessed with the spirit of reform.

But he is not just a man of action. He is a mix of Hamlet and Laertes. He has an intellect to match his desire for action. TV channels are picking up his aphorisms and obiter dicta and disseminating them for the larger public good. There might be occasional slips like the Churchillian bit about the length of a speech, but I think the detractors are completely wrong in alleging that he picked it up from Google. Today’s digital creatures tend to forget that much before Google entered our lives, the honorable judge’s generation was raised on books of quotations. If anything, he picked it up in a book which even the detractors will agree is a far better way of accessing knowledge than Google and Wikipedia.

As for the minor issue of the propriety of referring to women’s skirts, my personal take is that Churchill couldn’t have referred to the kilt because, frankly, no one is really interested in men’s hairy legs or the length of a kilt. Also, both Churchill and the CJP belong to the pre-thong, pre-minis generation and the detractors need to focus on the main point rather than getting their g-strings in a bunch over the reference. In any case, it’s better to talk skirt than skirt reform.

There’s also some sophisticated criticism of the CJP’s newfound brio for reforms and the ingress into the policy domain. That is always the worse kind of criticism, bring forth as it does multi-disciplinary references to point out that top-down, one-man reformism is generally to be avoided for a host of reasons.

This is armchair nitpicking. Take, for instance, Isaiah Berlin’s two concepts of liberty and his insistence that positive liberty is a coercive tool in the hands of those who believe that the true interests of individuals relate to their higher selves and in order to fulfill them it is perfectly legit to guide and, if need be, coerce them towards that end.

We see the same thing here. Lower, selfish selves overriding the higher selves among both the washed and the unwashed. Selfish politics; poor governance; lack of empathy; policemen bathing outside Hamza Shahbaz’s residence in ‘nikkars’.

On the last one I am a tad confused. Did the CJP refer to the cruelty of making policemen bathe outside in the cold weather or did he think given the physical fitness of Punjab puls the neighbors should be spared the sight of their ungainly bodies? I won’t know and I am not going to spend time thinking about it. Enough that the CJP has spoken and when he speaks, others must listen.

But the most important thing, leaving aside any innate desire the CJP might have to do good, is somewhat simple: why does he have the space to do what the detractors say he shouldn’t be doing?

Put another way, clearly someone should be doing what he is doing and which the critics think he shouldn’t be doing. And what might that what or who be?

When Iftikhar Chaudhry was chief justice, most jurists, including those who had stood up for him, had come round to despair of his populism and his enthusiasm for taking suo motu action. And yet, as many tell me, he did do some good with the suo motu device.

Ditto with the current CJP. Now, we can either take a consistent approach to this issue or continue in the current state of cherry-picking cases where we like the suo motu and rubbishing overreach when and where we don’t.

The fact, however, is that the court gets into this minefield because those whose job it is to clear it either refuse to do so, are reluctant, or are simply incapable of doing so. The court then gets in, gets its hands and its reputation sullied and the system, for all such interventions and in spite of them, remains dysfunctional because actor X is trying to do the job of actor Y and that, beyond a certain point, never works.

In the process, as is the wont of sapiens, the court develops its own notions of grandeur, losing sight of the complexity and throwing up solutions that might be fit for children’s primers but fall woefully short on other counts.

The problem, in other words, is not just Baba Rehmat’s. It involves the government, the politicians, the bureaucracy, the media, the society—basically, all of us. In which case, as should be obvious, if we don’t want the court or any other organization to become the thin end of the reforms wedge, including saving democracy, everyone must step up to the plate.

Churchill’s word were mauled into Pakistani legal idiom by our judge but even mis-quoting Churchill with his well known views on “Mohammedanism” raises a question mark. Activism is well and good but it needs to very well informed on the issues it focusses on or it will simply end up making matters even more messy.