According to the National Institute of Health, the government recorded 263 new recoveries and 990 new infections in the past 24 hours—the highest single-day jump thus far witnessed in the country. The jump comes despite testing in the country continuing to be far below the government’s claimed capacity. Per Planning Minister Asad Umar, the country currently has the capability to administer over 20,000 tests/day. However, it has yet to exceed 10,000 tests over a 24-hour duration.

Overall, 7,971 tests were administered in the past 24 hours—278 less than a day earlier—with Sindh and Punjab provinces comprising the bulk at a little over 2,500 tests each.

Prime Minister Imran Khan on Thursday said the ongoing lockdowns had been too focused on the ‘elite’ and had not been implemented in manner that could support the livelihoods of the impoverished. However, the federal government has itself imposed lockdowns thrice since March, raising questions over whether the premier is criticizing his own government’s actions in the response to COVID-19.

The government has also claimed that the number of cases is “below expectations” though no modeling has been shared with the public. Last week, the focal person on COVID-19 response, Dr. Faisal Sultan, said projections had estimated infections in Pakistan to jump to 12,000-15,000 by the end of April. On May 1, the infections are nearing 17,000, placing them slightly ahead of the predicted model. Yet, Planning Minister Asad Umar has claimed the infections are “30-35 percent lower” than models.

The country’s most populous province recorded 279 new infections in the past 24 hours, raising its total confirmed COVID-19 cases to 6,340. Punjab has also reported 3 new deaths, bringing its casualty count to 106.

Punjab conducted slightly over 2,500 tests in the past 24 hours, a far cry from the provincial government’s claims it has the capacity to test more than 4,500/day.

The Sindh government on Thursday announced it was extending the existing lockdown restrictions through the end of Ramzan, adding that on Fridays there would be a complete curfew between the hours of noon and 3 p.m. 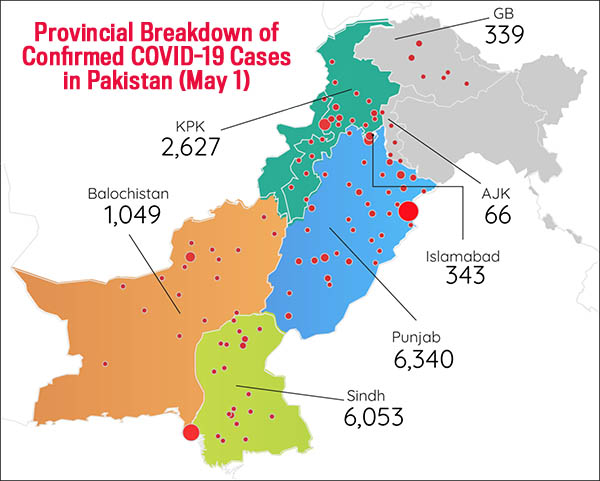 The province continues to report the highest fatality rate due to COVID-19 in Pakistan, with the tally climbing to 146 from 122 a day earlier. Overall, the province has now recorded 2,627 confirmed cases of the novel coronavirus, with 654 recoveries. It currently has 1,827 active cases, 250 more than 24 hours ago.

Health and Finance Minister Taimur Jhagra has said that the province is sampling close to 1,000 tests/day, adding that in the coming weeks this would be doubled. The province has also issued a revised policy for testing, which would prioritize healthcare workers, contacts of positive cases, and community-based surveillance sampling.

The province has thus far reported 1,049 confirmed cases of the novel coronavirus, with 14 deaths and 183 recoveries. It currently has 852 active cases, 68 more than 24 hours earlier. Per the Balochistan Health Department, 880 of the confirmed cases have been due to local transmission.

The province has not reported any new deaths in the past 24 hours.

Provincial government spokesman Liaquat Shahwani has warned that if the cases continue to spike, the government would have no choice but to order a complete curfew in a bid to curb the spread of the novel coronavirus.

Islamabad on Friday morning raised its confirmed COVID-19 infections to 343, with no new deaths or recoveries. Overall, Islamabad has thus far reported 4 deaths and 44 recoveries, leaving 295 active cases, 30 more than a day earlier.

In Gilgit-Baltistan, cases of the novel coronavirus rose to 339, with no new deaths and 20 new recoveries. Overall, 3 deaths have been reported from the region and 248 recoveries, leaving 91 active cases, 11 less than a day earlier.

Pakistan-administered Kashmir has reported zero new infections or deaths, and 6 new recoveries in the past 24 hours. Overall, it has 66 confirmed cases and 43 recoveries, leaving 23 active cases, 6 less than a day earlier.

Globally, the virus has now infected more than 3,308,640 people, with over 234,120 reported deaths. Governments across the world have halted flights, locked down towns and cities and urged people to stay at home, but there are signs of easements to help shuttered economies recover. Overall, around 1,042,900 patients of the 3.3 million+ infected have recovered thus far.