On Tuesday, Pakistan’s active cases had been reported as 4,242, suggesting the rate of recovery is much slower than the pace of infections, which could potentially overwhelm the country’s healthcare facilities if it continues.

According to the government’s official dashboard—which is no longer monitoring the number of COVID-19 patients currently in critical condition—Pakistan tested just 3,511 people in the past 24 hours against the government’s tall claims of having the capacity to test upwards of 25,000 daily. Experts have repeatedly asserted that aggressive testing is necessary to isolate clusters of the virus so its spread among communities can be curbed.

Late Tuesday night, Punjab Chief Minister Usman Buzdar posted on his Twitter account that the province had now reached 2,945 confirmed coronavirus cases, 1,055 of who were members of the Tablighi Jamaat. The province also has 701 cases among pilgrims returning from Iran, and 89 among prisoners. Per the chief minister, there are now 1,100 “non-quarantine” cases.

The total deaths reported by the province increased by 4 to 28, with 9 patients currently in critical condition. Overall, the province has administered 43,565 tests for the coronavirus, a jump of approximately 1,700 from the previous day, far short of the provincial health department’s claims that it can test more than 3,500 people per day.

The Sindh Health Department has confirmed that the province has discovered 1,518 patients with COVID-19, including 35 deaths and 427 recoveries. This leaves 1,056 active cases in the province, 54 more than were reported a day earlier. The greatest number of cases has been reported from provincial capital Karachi, 1003, of whom 819 are still active. According to Meeran Yousuf, media coordinator at the Sindh Health Department, 75 percent of the cases in Karachi are of local transmission, raising fears that easing lockdowns will result in a massive surge in new cases.

Chief Minister Murad Ali Shah had urged the federal government to adopt stricter lockdowns for two additional weeks, but Prime Minister Imran Khan on Tuesday announced several exemptions to the movement restrictions—though he added that provinces were free to decide on their own if they wanted to retain stricter measures.

The number of confirmed COVID-19 cases in Khyber-Pakhtunkhwa has risen to 865, with 38 deaths and 178 recoveries, leaving 649 active cases in the province. Health and Finance Minister Taimur Jhagra has confirmed on Twitter that 3 new deaths and 65 new cases were reported in the last 24 hours against 416 tests administered.

“Total testing in Khyber-Pakhtunkhwa yesterday [Monday] surpassed 500 tests for the first time,” he posted on Twitter last night. “Our flagship lab at KMU conducted a record 358 tests. Thank you to the team. As promised, we are working to expand government capacity to over 2,000 as soon as possible,” he said. The minister has repeatedly said more data is essential to curbing the spread of the coronavirus and in this regard massive testing of the population has to be achieved. 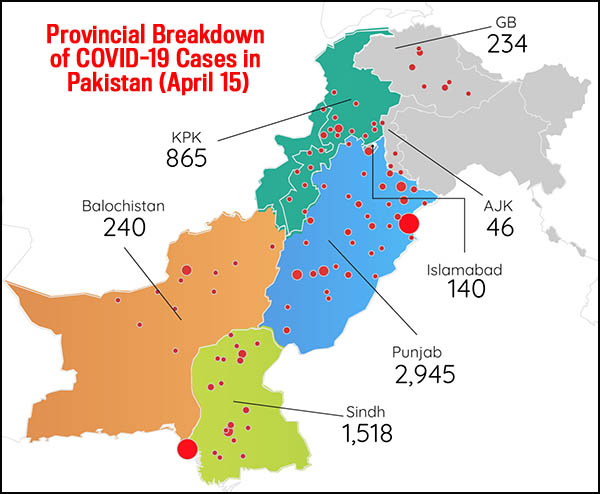 Provincial authorities have reported nine new cases—all from Quetta—and 13 new recoveries in the past 24 hours, bringing its total to 240, with 137 recoveries and 2 deaths. It currently has 101 active cases of COVID-19, down from 105 a day earlier.

The Balochistan government had already extended provincial lockdowns to April 21, and spokesperson Liaquat Shahwani on Twitter said that to ease the burden on traders, shops of seeds, fertilizers, bardana, dates, cement, steel had been allowed to resume operations. Restaurants have also been allowed to reopen for takeaway services. “Rest of the shops, excluding essential food items and medical stores will remain closed,” he said.

In the federal capital, 9 new cases were reported in the past 24 hours, as were 2 recoveries, raising its confirmed cases to 140, with 17 recoveries and 1 death. There are currently 122 active cases in Islamabad. Meanwhile, in Gilgit-Baltistan, the infections rose to 234, with 3 deaths and 175 recoveries. The region now has 59 active cases. In Pakistan-administered Kashmir, which has thus far reported no deaths from COVID-19, the total number of confirmed coronavirus cases rose to 46, with 4 recoveries, leaving 42 active cases.

The Government of Pakistan on Tuesday announced that it was easing the ongoing movement restrictions and opening up several industries, but would maintain bans on large public gatherings, schools, shopping centers, and public transport. Announcing the measures, Prime Minister Imran Khan claimed the country was stuck between “hunger on one side, and corona on the other,” and had opted to resume economic activity to aid daily wagers and laborers.

The federal government also announced that it would soon issue an ordinance with a stimulus package for the construction industry the “likes of which have never been seen in Pakistan before.”

Globally, the virus has now infected more than 2,000,000 people, with over 126,750 reported deaths. Governments across the world have halted flights, locked down towns and cities and urged people to stay at home. Overall, around 484,500 patients of the 2 million+ infected have recovered thus far.