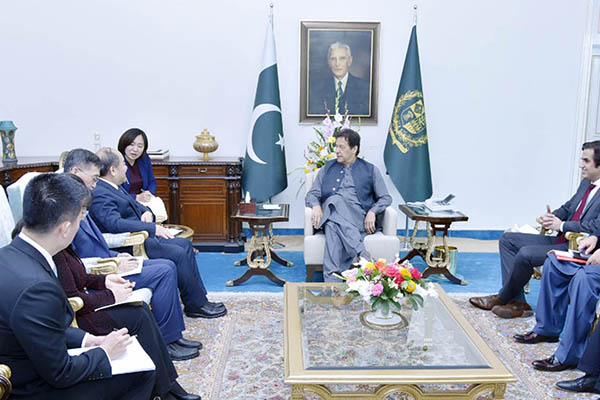 Prime Minister Imran Khan on Tuesday said the China-Pakistan Economic Corridor remained the country top priority, citing it as pivotal in ties between the two nations and essential for Pakistan’s economic transformation.

Talking to a Chinese delegation led by National Development and Reform Commission Vice-Chairman Ning Ji Zhe at the Prime Minister’s Office, Khan said the visit would help consolidate the gains made during the first phase of CPEC and accelerate the implementation of the second phase.

According to the Associated Press of Pakistan, the prime minister appreciated China’s support to Pakistan on a wide range of issues. He also emphasized the importance of ML-1 to modernize Pakistan’s railway system, and invited the NDRC vice-chairman to explore opportunities in steel industry, copper and gold mining, and increased agricultural productivity.

The new projects will provide impetus to the second phase of CPEC, and usher in a new era of cooperation between Beijing and Islamabad, he added.

During the meeting, the NDRC vice-chairman expressed gratitude for the warm welcome accorded to him and conveyed to the P.M. the greetings of President Xi Jinping and Premier Li Keqiang. He reiterated China’s commitment to further deepen Pakistan-China partnership in all fields. Lauding the steps taken by Pakistan to enhance coordination and accelerate completion of CPEC projects, he hoped that CPEC would provide practical benefits to the people of Pakistan.